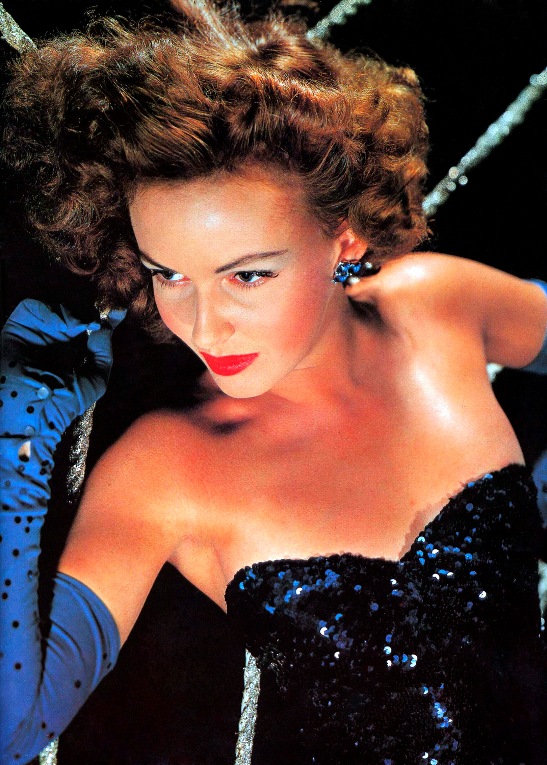 LOS ANGELES, California (AP) -- Cyd Charisse, the long-legged Texas beauty who danced with the Ballet Russe as a teenager and starred in MGM musicals with Fred Astaire and Gene Kelly, died Tuesday. She was 86.

Charisse was admitted to Cedars-Sinai Medical Center on Monday after suffering an apparent heart attack, said her publicist, Gene Schwam.

She appeared in dramatic films, but her fame came from the Technicolor musicals of the 1940s and 1950s.

Classically trained, she could dance anything, from a pas de deux in 1946's "Ziegfeld Follies" to the lowdown Mickey Spillane satire of 1956's "The Band Wagon" (with Astaire).

She also forged a popular song-and-dance partnership on television and in nightclub appearances with her husband, singer Tony Martin.

Her height was 5 feet, 6 inches, but in high heels and full-length stockings, she seemed serenely tall, and she moved with extraordinary grace. Her flawless beauty and jet-black hair contributed to an aura of perfection that Astaire described in his 1959 memoir, "Steps in Time," as "beautiful dynamite."

Charisse arrived at MGM as the studio was establishing itself as the king of musicals. Three producers -- Arthur Freed, Joe Pasternak and Jack Cummings -- headed units that drew from the greatest collection of musical talent. Dancers, singers, directors, choreographers, composers, conductors and a symphony-size orchestra were under contract and available. The contract list also included the screen's two greatest male dancers: Astaire and Kelly.

Astaire, who danced with her in "The Band Wagon" and "Silk Stockings," said of Charisse in a 1983 interview: "She wasn't a tap dancer, she's just beautiful, trained, very strong in whatever we did. When we were dancing, we didn't know what time it was."

She first gained notice as a member of the famed Ballet Russe, and got her start in Hollywood when star David Lichine was hired by Columbia Pictures for a ballet sequence in a 1943 Don Ameche-Janet Blair musical, "Something to Shout About."

Although that film failed to live up to its title, its ballet sequence attracted wide notice, and Charisse (then billed as Lily Norwood) began receiving movie offers.

"I had just done that number with David as a favor to him," she said in "The Two of Us," her 1976 double autobiography with Martin. "Honestly, the idea of working movies had never once entered my head. I was a dancer, not an actress. I had no delusions about myself. I couldn't act -- I had never acted. So how could I be a movie star?"

She overcame her doubts and signed a seven-year contract at MGM. She also got a new name, the exotic "Cyd" instead of her lifelong nickname Sid, to go with her first husband's last name.

The 1952 classic "Singin' in the Rain" marked a breakthrough.

When Freed was dissatisfied with another dancer who had been cast, Charisse inherited the role and danced with Kelly in the "Broadway Melody" number that climaxed the movie. She stunned critics and audiences with her 25-foot Chinese silk scarf that floated in the air with the aid of a wind machine.

Charisse also danced with Kelly in "Brigadoon," "It's Always Fair Weather" and "Invitation to the Dance." She missed what might have been her greatest opportunity: to appear with Kelly in the 1951 Academy Award winner, "An American in Paris." She was pregnant, and Leslie Caron was cast in the role.

In 1996, Charisse recalled her reaction on entering the movies: "Ballet is a closed world and very rigid; MGM was a fairyland. You'd walk down the lot, seeing all these fabulous movies being made with the greatest talent in the world sitting there. It was a dream to walk through that lot."

Her first assignment was a "Ziegfeld Follies" sequence in which she was one of the female dancers "flitting around Astaire as he danced."

Like most young MGM contract players, she was schooled in drama and voice, and diction lessons eliminated her Texas accent. The singing lessons didn't take, however, and the songs in her musicals were dubbed.

She graduated to featured dancer in sequences for such films as "Till the Clouds Roll By," "Fiesta," "On an Island with You" and "Words and Music." She also appeared in such dramatic films as "East Side, West Side," "Tension" and "Mark of the Renegade."

"Silk Stockings" in 1957 marked the end of her dancing career in films, as well as the twilight of the movie musical. With the film business suffering from the onslaught of television, MGM dismantled its great collection of talent. Musicals were too expensive, and foreign audiences had soured on them.

Charisse continued with dramatic films, several of them made in Europe. She and Martin took their musical act to Las Vegas and elsewhere. In 1992 she finally made her Broadway debut, taking over the starring role as the unhappy ballerina in the musicalized "Grand Hotel." The musical had premiered in 1989 with Liliane Montevecchi in the role.

"I've done about everything in show business except to play on Broadway," Charisse said in a 1992 Associated Press interview. "I always hoped that I would one day. It's the World Series of show business. If anybody tells you they're not intimidated, they're lying."

In 1974, Charisse returned to MGM for a TV drama. Gazing over the half-filled commissary at lunchtime, she mused: "You never realize that good things are going to be over sometime. It all seemed so natural then: Clark Gable and Robert Taylor lunching at one table. Lana Turner would be lunching at a table in the corner. Ava Gardner, too.

"I grew up at this studio, and it didn't seem unusual to see all those stars. Nowadays, you'd never find so many names in one commissary. In fact, there aren't that many stars."

Her name was Tula Ellice Finklea when she was born in Amarillo, Texas, on March 8, 1922. From her earliest years she was called Sid, because her older brother couldn't say "sister." She was a sickly girl who started dancing lessons to build up her strength after a bout with polio.

"I was so frail they were afraid to touch me," she recalled in that 1996 interview.

At 14 she auditioned for the head of the famed Ballet Russe, and became part of the corps de ballet and toured the U.S. and Europe. To appear with the nearly all-Russian company, she was first billed as Celia Siderova, than as Maria Istromena.

At one point during the European tour, she met up again with Nico Charisse, a handsome young dancer she had studied with for a time in Los Angeles. They married in Paris in 1939.

The Ballet Russe disbanded after the war broke out, and the newlyweds returned to Hollywood. In 1942, a son, Nicky, was born.