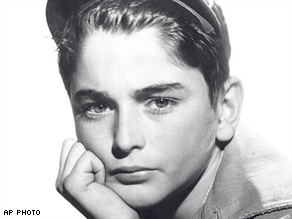 LOS ANGELES, California (AP) -- Bob Anderson, who played the young George Bailey in the Christmas classic "It's a Wonderful Life," has died. He was 75.

Anderson died Friday of cancer at his home in Palm Springs, his wife, Victoria, said Saturday.

Robert J. Anderson grew up in a Hollywood family. His father, Gene, was an assistant director and later a production manager. His uncles were directors William Beaudine and James Flood, and his brothers and cousins were editors and production managers.

Anderson was introduced to films when relatives arranged for him to appear in a movie scene that called for a baby, his wife said.

He was 7 when he appeared in the 1940 Shirley Temple film "Young People" and went on to play roles in such films as 1945's "A Tree Grows in Brooklyn."

But he was best known for his role as the young Bailey in Frank Capra's 1946 "It's a Wonderful Life," the same character portrayed in adulthood by James Stewart. In one scene, the story called for him to spot a potentially fatal error made by a drunken druggist, played by H.B. Warner.

Warner took the role seriously and on the day of shooting had been drinking and was "pretty ripe," Victoria Anderson said. The scene called for Warner's character to slap the boy.

Anderson told the Los Angeles Times in 1996 that the scene and its rehearsals were painful.

"He actually bloodied my ear," Anderson told the paper. "My ear was beat up and my face was red, and I was in tears."

"At the end when it was all over, he (Warner) was very lovable. He grabbed me and hugged me, and he meant it," Anderson said.

Anderson enlisted in the Navy during the Korean War, serving as a photographer on aircraft carriers, his wife said.

After the war, he spent four decades in the movie industry. From the 1950s through the 1990s he worked steadily, rising from second assistant director to production manager for movies and TV shows, his wife said.