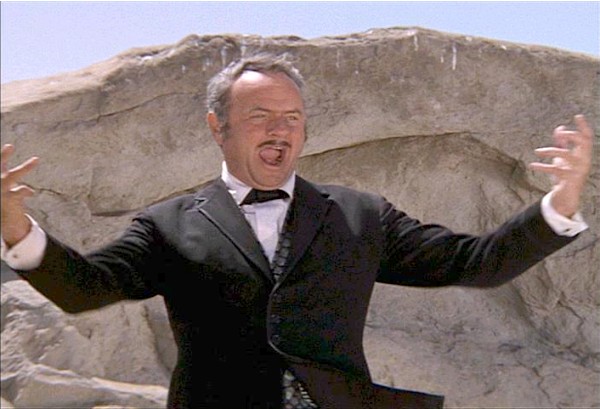 LOS ANGELES - Harvey Korman, the tall, versatile comedian who won four Emmys for his outrageously funny contributions to “The Carol Burnett Show” and on the big screen in “Blazing Saddles,” died Thursday. He was 81.

Korman died at UCLA Medical Center after suffering complications from the rupture of an abdominal aortic aneurysm four months ago, his family said in a statement released by the hospital.

His daughter, Kate Korman, said in the statement that it was a “miracle” that her father had survived the aneurysm at all, and that he had several major operations.

“Tragically, after such a hard fought battle he passed away,” she said.

Second banana
A natural second banana, Korman gained attention on “The Danny Kaye Show,” appearing in skits with the star. He joined the show in its second season in 1964 and continued until it was canceled in 1967. That same year he became a cast member in the first season of “The Carol Burnett Show.”

Burnett and Korman developed into the perfect pair with their burlesques of classic movies such as “Gone With the Wind” and soap operas like “As the World Turns” (their version was called “As the Stomach Turns”).

Another recurring skit featured them as “Ed and Eunice,” a staid married couple who were constantly at odds with the wife’s mother (a young Vickie Lawrence in a gray wig). In “Old Folks at Home,” they were a combative married couple bedeviled by Lawrence as Burnett’s troublesome young sister.

Burnett was devastated by the news, said her assistant, Angie Horejsi.

“She loved Harvey very much,” Horejsi said. She said Burnett had not yet made a statement.

Korman revealed the secret to the long-running show’s success in a 2005 interview.

“We were an ensemble, and Carol had the most incredible attitude. I’ve never worked with a star of that magnitude who was willing to give so much away.”

After 10 successful seasons, he left in 1977 for his own series. Dick Van Dyke took his place, but the chemistry was lacking and the Burnett show was canceled two years later. “The Harvey Korman Show” also failed, as did other series starring the actor.

“It takes a certain type of person to be a television star,” he said in that 2005 interview. “I didn’t have whatever that is. I come across as kind of snobbish and maybe a little too bright. ... Give me something bizarre to play or put me in a dress and I’m fine.”

Memorable roles
His most memorable film role was as the outlandish Hedley Lamarr (who was endlessly exasperated when people called him Hedy) in Mel Brooks’ 1974 Western satire, “Blazing Saddles.”

Korman’s other films included “Gypsy,” “Huckleberry Finn” (as the King), “Herbie Goes Bananas” and “Bud and Lou” (as legendary straightman Bud Abbott to Buddy Hackett’s Lou Costello). He also provided the voice of Dictabird in the 1994 live-action feature “The Flintstones.”

In television, Korman guest-starred in dozens of series including “The Donna Reed Show,” “Dr. Kildare,” “Perry Mason,” “The Wild Wild West,” “The Muppet Show,” “The Love Boat,” “The Roseanne Show” and “Burke’s Law.”

In their ’70s, he and Tim Conway, one of his Burnett show co-stars, toured the country with their show “Tim Conway and Harvey Korman: Together Again.” They did 120 shows a year, sometimes as many as six or eight in a weekend.

Working his way up
Harvey Herschel Korman was born Feb. 15, 1927, in Chicago. He left college for service in the U.S. Navy, resuming his studies afterward at the Goodman School of Drama at the Chicago Art Institute. After four years, he decided to try New York.

“For the next 13 years I tried to get on Broadway, on off-Broadway, under or beside Broadway,” he told a reporter in 1971.

He had no luck and had to support himself as a restaurant cashier. Finally, in desperation, he and a friend formed a nightclub comedy act.

“We were fired our first night in a club, between the first and second shows,” he recalled.

After returning to Chicago, Korman decided to try Hollywood, reasoning that “at least I’d feel warm and comfortable while I failed.”

For three years he sold cars and worked as a doorman at a movie theater. Then he landed the job with Kaye.

In 1960 Korman married Donna Elhart and they had two children, Maria and Christopher. They divorced in 1977. Two more children, Katherine and Laura, were born of his 1982 marriage to Deborah Fritz.

In addition to his daughter Kate, he is survived by his wife and the three other children.