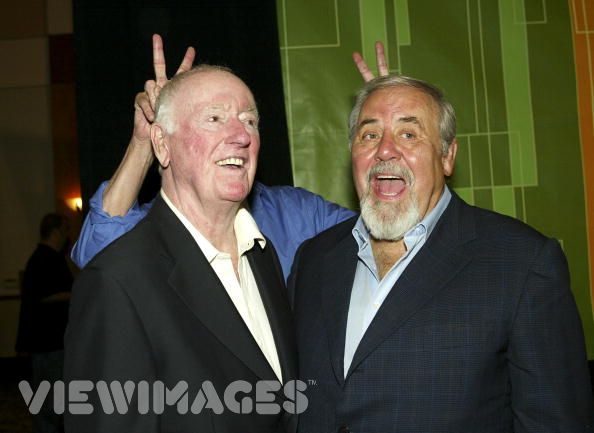 LOS ANGELES, California (AP) -- Dick Martin, the zany half of the comedy team whose "Rowan and Martin's Laugh-In" took television by storm in the 1960s, making stars of Goldie Hawn and Lily Tomlin and creating such national catch-phrases as "Sock it to me!" has died. He was 86.

Martin, who went on to become one of television's busiest directors after splitting with Dan Rowan in the late 1970s, died Saturday night of respiratory complications at a hospital in Santa Monica, family spokesman Barry Greenberg said.

"He had had some pretty severe respiratory problems for many years, and he had pretty much stopped breathing a week ago," Greenberg said.

Martin had lost the use of one of his lungs as a teenager, and needed supplemental oxygen for most of the day in his later years.

He was surrounded by family and friends when he died just after 6 p.m., Greenberg said.

"Laugh-in," which debuted in January 1968, was unlike any comedy-variety show before it. Rather than relying on a series of tightly scripted song-and-dance segments, it offered up a steady, almost stream-of-consciousness run of non-sequitur jokes, political satire and madhouse antics from a cast of talented young actors and comedians that also included Ruth Buzzi, Arte Johnson, Henry Gibson, Jo Anne Worley and announcer Gary Owens.

Presiding over it all were Rowan and Martin, the veteran nightclub comics whose standup banter put their own distinct spin on the show.

Like all straight men, Rowan provided the voice of reason, striving to correct his partner's absurdities. Martin, meanwhile, was full of bogus, often risque theories about life, which he appeared to hold with unwavering certainty.

Against this backdrop, audiences were taken from scene to scene by quick, sometimes psychedelic-looking visual cuts, where they might see Hawn, Worley and other women dancing in bathing suits with political slogans, or sometimes just nonsense, painted on their bodies. Other times, Gibson, clutching a flower, would recite nonsensical poetry or Johnson would impersonate a comical Nazi spy.

"Laugh-In" astounded audiences and critics alike. For two years, the show topped the Nielsen ratings, and its catchphrases-- "Sock it to me," "You bet your sweet bippy" and "Look that up in your Funk and Wagnall's" -- were recited across the country.

Stars such as John Wayne and Kirk Douglas were delighted to make brief appearances, and even Richard Nixon, running for president in 1968, dropped in to shout a befuddled sounding, "Sock it to me!" His opponent, Vice President Hubert Humphrey, was offered equal time but declined because his handlers thought it would appear undignified.

Rowan and Martin landed the show just as their comedy partnership was approaching its zenith and the nation's counterculture was expanding into the mainstream.

The two were both struggling actors when they met in 1952. Rowan had sold his interest in a used car dealership to take acting lessons, and Martin, who had written gags for TV shows and comedians, was tending bar in Los Angeles to pay the rent.

Rowan, hearing Martin was looking for a comedy partner, visited him at the bar, where he found him eating a banana.

"Why are you eating a banana?" he asked.

"If you've ever eaten here, you'd know what's with the banana," he replied, and a comedy team was born.

Although their early gigs in Los Angeles' San Fernando Valley were often performed gratis, they donned tuxedos for them and put on an air of success.

"We were raw," Martin recalled years later, "but we looked good together and we were funny."

They gradually worked up to the top night spots in New York, Miami and Las Vegas and began to appear regularly on television.

In 1966, they provided the summer replacement for "The Dean Martin Show." Within two years, they were headlining their own show.

The novelty of "Laugh-In" diminished with each season, however, and as major players such as Hawn and Tomlin moved on to bigger careers, interest in the series faded.

After the show folded in 1973, Rowan and Martin capitalized on their fame with a series of high-paid engagements around the country. They parted amicably in 1977.

"Dan has diabetes, and his doctor advised him to cool it," Martin told The Associated Press at the time.

Rowan, a sailing enthusiast, spent his last years touring the canals of Europe on a houseboat. He died in 1987.

Martin moved onto the game-show circuit, but quickly tired of it. After he complained about the lack of challenges in his career, fellow comic Bob Newhart's agent suggested he take up directing.

He was reluctant at first, but after observing on "The Bob Newhart Show," he decided to try. He would recall later that it was "like being thrown into the deep end of the swimming pool and being told to sink or swim."

Soon he was one of the industry's busiest TV directors, working on numerous episodes of "Newhart" as well as such shows as "In the Heat of the Night," "Archie Bunker's Place" and "Family Ties."

Born into a middle-class family in Battle Creek, Mich., Martin had worked in a Ford auto assembly plant after high school.

After an early failed marriage, he was, for years, a confirmed bachelor. He finally settled down in middle age, marrying Dolly Read, a former bunny at the Playboy Club in London. Survivors include his wife and two sons, actor Richard Martin and Cary Martin.

At Martin's request, there will be no funeral, Greenberg said.

Martin lost the use of his right lung when he was 17, something that never bothered him until his final years, when he required oxygen 18 hours a day.

Arriving for a party celebrating his 80th birthday, he fainted and was treated by doctors and paramedics. The party continued, however, and he cracked, "Boy, did I make an entrance!"