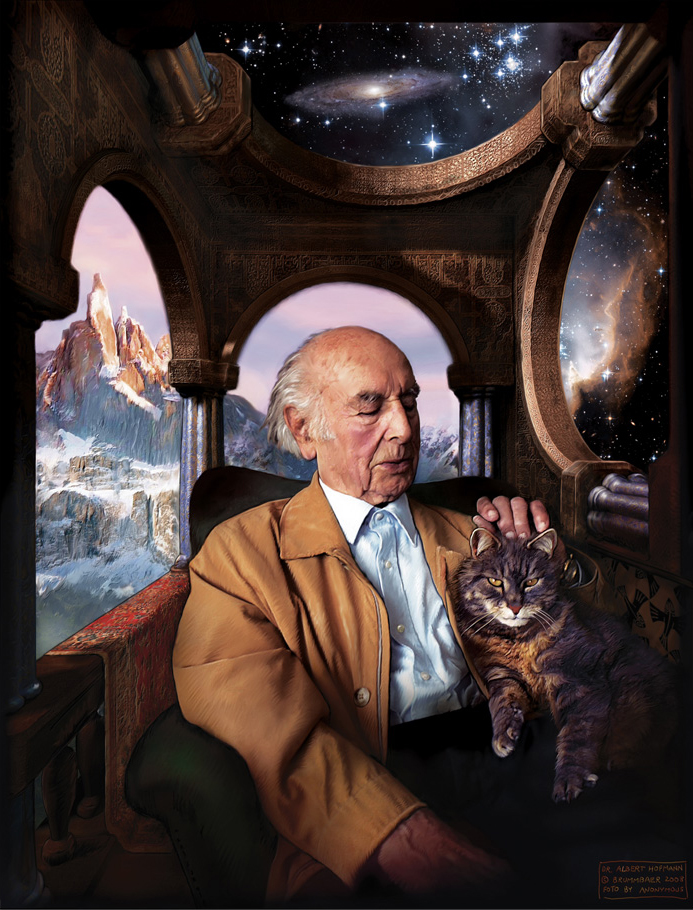 Albert Hofmann, who died on Tuesday aged 102, synthesised lysergic acid diethylamide (LSD) in 1938 and became the first person in the world to experience a full-blown acid trip.

The day, April 19 1943, became known among aficionados as “Bicycle Day” as it was while cycling home from his laboratory that he experienced the most intense symptoms.

Hofmann was working as a research chemist in the laboratory of the Sandoz Company (now Novartis) in Basel, Switzerland, where he was involved in studying the medicinal properties of plants. This eventually led to the study of the alkaloid compounds of ergot, a fungus which forms on rye.

In the Middle Ages, ergot was implicated in period outbreaks of mass poisonings, producing symptoms in two characteristic forms, one gangrenous (ergotismus gangraenosus) and the other convulsive (ergotismus convulsivus).


Popular names such as “mal des ardents,” “ignis sacer,” “heiliges Feuer,” or “St Anthony’s fire” — refer to the gangrenous form of the disease.

Hofmann’s studies led to many new discoveries such as Hydergine, a medicament for improvement of circulation and cerebral function and Dihydergot, a circulation and blood pressure stabilising medicine.

His interest in synthesising LSD was stimulated at first by the hope that it might also be useful as a circulatory and respiratory stimulant.

But when his molecule, known as LSD-25, was tested on animals, no interesting effects were observed, though the research notes recorded that the beasts became “restless” during narcosis. The substance was dismissed as of no interest and dropped from Sandoz’s research programme.

But five years later, acting on some intuition, Hofmann decided to resynthesise LSD. In his autobiography, LSD, My Problem Child (1979), he recalled that in the final stage of the synthesis, he was interrupted by some unusual sensations.

In a note to the laboratory’s director, he reported “a remarkable restlessness, combined with a slight dizziness. At home I lay down and sank into a not unpleasant intoxicated-like condition, characterized by an extremely stimulated imagination.

"In a dreamlike state, with eyes closed, I perceived an uninterrupted stream of fantastic pictures, extraordinary shapes with intense, kaleidoscopic play of colours. After some two hours this condition faded away.”

Hofmann concluded that he must have accidentally breathed in or ingested some laboratory material and assumed LSD was the cause. To test the theory he waited until the next working day, Monday April 19 1943, and tried again, swallowing 0.25 of a milligram.

Unable to write any more, he asked his assistant to take him home by bicycle. “On the way home, my condition began to assume threatening forms.

"Everything in my field of vision wavered and was distorted as if seen in a curved mirror. I also had the sensation of being unable to move from the spot. Nevertheless, my assistant later told me that we had travelled very rapidly.”

Back home, when a friendly neighbour brought round some milk, he perceived her as a “malevolent, insidious witch” wearing “a lurid mask”. After six hours of highs and lows, the effects subsided.

Sandoz, keen to make a profit from Hofman’s discovery, gave the new substance the trade name Delysid and began sending samples out to psychiatric researchers.

By 1965 more than 2,000 papers had been published offering hope for a range of conditions from drug and alcohol addiction to mental illnesses of various sorts.

But the fact that it was cheap and easy to make left it open to abuse and from the late 1950s onwards, promoted by Dr Timothy Leary and others, LSD became the recreational drug of choice for alienated western youth.

An outbreak of moral panic, combined with a number of accidents involving people jumping to their deaths off high buildings thinking they could fly, led governments around the world to ban LSD.

Research also showed that the drug taken in high doses and in inappropriate settings, often caused panic reactions. For certain individuals, a bad trip seemed to be the trigger for full-blown psychosis.

Hofmann was disappointed when his discovery was removed from commercial distribution. He remained convinced that the drug had the potential to counter the psychological problems induced by “materialism, alienation from nature through industrialisation and increasing urbanisation, lack of satisfaction in professional employment in a mechanised, lifeless working world, ennui and purposelessness in wealthy, saturated society, and lack of a religious, nurturing, and meaningful philosophical foundation of life”.

Albert Hofmann was born at Baden, Switzerland, on January 11 1906, the elder of two children. Having graduated from Zürich University with a degree in chemistry in 1929 he took a doctorate on the gastro-intestinal juice of the vineyard snail.

After leaving university, he went to work for Sandoz Pharmaceuticals where he researched the medicinal properties of the Mediterranean squill (Scilla maritima), before moving on to the study of Claviceps purpurea (ergot).

As a result of the use of LSD as a recreational drug Sandoz found itself bombarded with demands for information from regulatory bodies along with demands for statements after accidents, poisonings, criminal acts and so forth from the press. For scientists unaccustomed to the glare of publicity, it became a headache.

“I would rather you hadn’t discovered LSD,” Hofmann’s managing director told him. In the end the decision was taken to stop all further production.

Hofmann laid some of the blame at the door of Dr Timothy Leary. In his autobiography, he described meeting Leary in 1971 in the railway station snack bar in Lausanne.

Hofmann began by voicing his regret that Leary’s experiments had effectively killed off academic research into LSD and took Leary to task for encouraging its recreational use among young people. Leary was unabashed.

“He maintained that I was unjustified in reproaching him for the seduction of immature persons to drug consumption,” Hofmann recalled, on the ground that American teenagers “with regard to information and life experience, were comparable to adult Europeans” and able to make up their own minds.

Hofmann continued to work at Sandoz until 1971 when he retired as Director of Research for the Department of Natural Products.

In addition to his discovery of LSD, he was also the first to synthesize psilocybin (the active constituent of “magic mushrooms”) in 1958.

In retirement, Hofmann served as a member of the Nobel Prize Committee. He was a Fellow of the World Academy of Sciences, and a Member of the International Society of Plant Research and of the American Society of Pharmacognosy.

In 1988 the Albert Hofmann Foundation was established “to assemble and maintain an international library and archive devoted to the study of human consciousness and related fields.”

He disapproved of the appropriation of LSD by the youth movements of the 1960s, but regretted that its potential uses had not been explored. He had been due to speak at the World Psychedelic Forum in March, but ill health prevented him from attending.