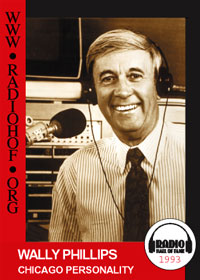 CHICAGO (AP) - Wally Phillips, the most listened-to Chicago radio host for two decades, has died. He was 82.

The longtime broadcaster, whose skillful blend of information and humor made him a pioneer of talk radio, died early Thursday after suffering from Alzheimer's disease, according to WGN, where he spent 42 years.

Mixing audience participation, public service and breaking news, his broadcast was the No. 1 morning show in Chicago from 1966 until he left to take over the afternoon program in 1986, according to WGN.

"Wally Phillips was the biggest, most successful, most influential local radio broadcaster in Chicago history," said Bruce DuMont, president of the Museum of Broadcast Communications, which inducted Phillips into its National Radio Hall of Fame in 1993. "He was the number one local radio personality in the United States."

At the height of his popularity, he had an audience of nearly 1.5 million - or about half the listeners in the Chicago area.

Phillips was one of the first radio hosts to use humorous and offbeat phone calls, like the one recounted on the museum's Web site in which Phillips telephoned a pet cemetery to arrange a funeral for his mouse, DuMont said. But his show had a serious side, too.

"Relying chiefly on his bank of telephones for contact with celebrities, newsmakers and average listeners, Wally alternates between whimsy and dead seriousness, between jokes and coverage of tragedy in the making, between trivia quizzes and social comment," the Chicago Tribune wrote in 1975. "You almost never hear a record played. The term 'disc jockey,' in fact, is poison to Phillips."

"It was his show and his success back in the early days ... that introduced the talk format that interacted with phone listeners," Wayne Vriesman, then WGN's vice president and general manager, told the Tribune in 1998, when he retired from WGN.

Phillips returned to the air in 1999 to host a two-hour weekly talk show on WAIT-AM, a station in suburban Chicago.

Phillips, a native of Portsmouth, Ohio, started his radio career after serving in the Army Air Forces in World War II. He worked in Grand Rapids, Mich., and Cincinnati before joining WGN in 1956.

In those early days, Phillips worked in both television and radio. Phillips took over the morning show in January 1965.