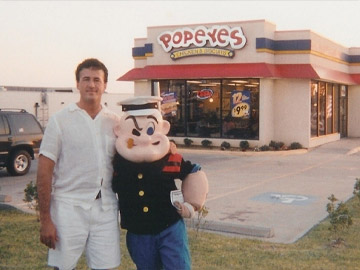 NEW ORLEANS (AP) - Al Copeland, who became rich selling spicy fried chicken and notorious for his flamboyant lifestyle, died Sunday at a clinic near Munich, Germany. He was 64.

The founder of the Popeyes Famous Fried Chicken chain had been diagnosed shortly before Thanksgiving with a malignant salivary gland tumor. His death was announced by his spokeswoman, Kit Wohl.

After growing up in New Orleans, Copeland sold his car at age 18 for enough money to open his own one-man doughnut shop. He went on to spend 10 modestly successful years in the doughnut business.

The opening of a Kentucky Fried Chicken restaurant in New Orleans in 1966, however, caught Copeland's eye. Inspired by KFC's success, Copeland in 1971 used his doughnut profits to open a restaurant, Chicken on the Run. ("So fast you get your chicken before you get your change.")

After six months, Chicken on the Run was still losing money. In a last-ditch effort, Copeland chose a spicier Louisiana Cajun-style recipe and reopened the restaurant under the name Popeyes Mighty Good Fried Chicken, after Popeye Doyle, Gene Hackman's character in the film "The French Connection." The chain that grew from the one restaurant became Popeyes Famous Fried Chicken.

Franchising began in 1976, growing the chain to more than 800 stores in the United States and several foreign countries by 1989.

In 1983, he founded Copeland's of New Orleans, a causal-dining, Cajun-style restaurant. In the next two decades the chain expanded as far as Maryland and west into Texas. He also started Copeland's Cheesecake Bistro, Fire and Ice restaurants, and Al's Diversified Food & Seasonings - a line of specialty foods and spices for large national restaurant chains.

The Church's purchase was heavily financed, however, and escalating debt forced Copeland's company to file for bankruptcy in 1991. Although Copeland lost both Church's and Popeyes in the bankruptcy, he retained the rights to some Popeyes products, which he manufactured through his Diversified Foods & Seasonings plants, along with a few Popeyes stores.

Copeland frequently made headlines away from his business empire.

His hobbies included racing 50-foot powerboats, touring New Orleans in Rolls Royces and Lamborghinis, and outfitting his Lake Pontchartrain home with lavish Christmas decorations, including half a million lights and a three-story-tall snowman. The display drew a lawsuit in 1983 from neighbors who said the resulting traffic held them hostage in their own homes.

Copeland and his third wife, Luan Hunter, were married at the New Orleans Museum of Art on Valentine's Day 1991. As they left the ceremony rose petals were tossed from a helicopter and fireworks exploded over the building.

The original presiding judge at their divorce, Ronald Bodenheimer, pleaded guilty to promising a custody deal favorable to Copeland in return for a possible seafood contract and other benefits. Two Copeland associates and Bodenheimer went to federal prison for participating in the conspiracy.

Copeland was never personally accused of participating in the scheme.