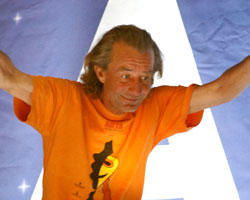 A former session drummer with Swedish pop band Abba has been found dead in the garden of his Spanish home with cuts to his throat, police say.

A spokeswoman said the man was 62-year-old Ola Brunkert, and said his death appeared to be accidental.

Police believe Brunkert hit his head on a window and shattered the glass which cut him. A post-mortem is taking place.

"He was a very creative musician who contributed a lot when we toured together and worked in the studio," he added.

The musician was found by a neighbour late on Sunday in a pool of blood.

He had managed to wrap a towel around his neck before leaving the house to summon help before collapsing in the garden.

Benny Anderson, who was also in the band, said the news was "tragic".

According to Abba's official website, Brunkert and bass player Rutger Gunnarsson were the only musicians to appear on all the group's albums.

Despite breaking up more than 25 years ago, the group best known for hits such as Waterloo and Take A Chance On Me, still sells between two and three million albums a year.