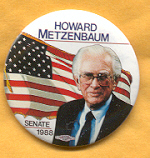 WASHINGTON (AP) -- Former Sen. Howard Metzenbaum, an Ohio Democrat who was a feisty self-made millionaire before he began a long career fighting big business in the Senate, died Wednesday night. He was 90.

Metzenbaum died at his home near Fort Lauderdale, Florida, said Joel Johnson, his former chief of staff. No cause was given.

During 18 years on Capitol Hill, from 1977 to 1995, Metzenbaum came to be known as "Senator No" and "Headline Howard" for his abilities to block legislation and get publicity for himself.

He was a cantankerous firebrand who didn't need a microphone to hold a full auditorium spellbound while dropping rhetorical bombs on big oil companies, the insurance industry, savings and loans, and the National Rifle Association, to name just a few favorite targets.

Unabashedly liberal, the former labor lawyer and union lobbyist considered himself a champion of workers and was a driving force behind the law requiring 60-day notice of plant closings.

When other liberals shied away from that label, Metzenbaum embraced it, winning re-election in 1988 from Ohio voters who chose Republicans for governor and president, and by wider margins than either George Voinovich or George H.W. Bush.

That victory produced his third, final and most productive term in the Senate. When it was over, in 1995, he started a new career as consumer advocate, heading the Consumer Federation of America.