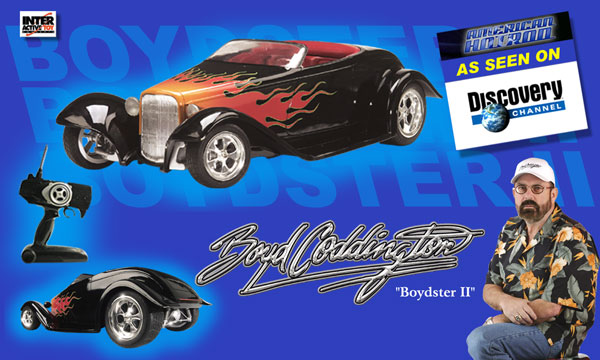 Coddington was raised in rural Rupert, Idaho, but as soon as he came of age moved to Southern California to pursue his dream of building hot rods. He quickly earned a reputation for subtle, stylistic innovations on what had been an almost overdone theme--the '32 Ford roadster. That branched out to '33s, '34s and then all manner of surprising twists on iconic themes.

His wheels were equally well known. They were first designed to match each car. Coddington specialized in machining them from billet aluminum, and soon earned the nickname "Billet Boyd."

An eye for talent

Perhaps his best trait, realized at the height of his creative passion in the mid-1990s, was his ability to gather a talented team to produce the creations he envisioned.

"His biggest talent was bringing talent to the table," said Foose. "It was like we were all spokes but we had to attach to one hub. He was the hub. He gave us the freedom to create."

Brad Fanshaw, who was president of the Coddington Companies during its glory days in the '90s, said: "I always looked at him as a conceptual designer. He couldn't draw himself but he had the concepts in his head and he would stand behind (designers) Chip (Foose), Larry (Erickson) and Thom (Taylor) and say, 'Yeah, that's what I want."

In the early '90s he had assembled one of the best teams ever, including designer Foose and builder Lil' John Buttera, to produce some of the best hot rods the hobby had ever seen, raising the level of what could be expected from such a craft.

His early works were swaddled in simple, flowing lines. The Foose-designed Boydster was an early Coddington interpretation of the iconic '32 Ford roadster, but Boyd's take was stretched three inches, lowered and smoothed out beyond what anyone else had ever done.

"We were cleaning up the cars at the time," designer Thom Taylor said. He started working with Coddington in the 1970s while still a student at Art Center College of Design in Pasadena, California.

"We were removing the door handles and the hinges, straightening out the contours of the frame, no louvers, no little trinket things, so that was kind of the theme for most of these cars," Taylor said.

The subsequent Boydsters II and III carried that theme but with full, flowing fenders.

The Smoothster was a yellow, full-fendered '37 Ford riding on Corvette mechanicals and a Corvette drivetrain.

A Corvette engine also powered the Taylor-designed Chezoom, a '57 Chevy so heavily modified that only 10 percent of the original sheetmetal remained. It was still unmistakably a '57, just unlike any '57 ever seen before, with a lowered, channeled body and a reclining cruiser elegance not normally associated with the muscle of the original.

Like Chezoom, Cadzilla was a reclined cruiser take on a more modern Cadillac. Designed by Larry Erickson and built by Coddington for ZZ Top guitarist Billy Gibbons, it is one of his most well-known creations.

Coddington went through his share of troubles, including a bankruptcy in the late 1990s. He is best known outside the rodding community for his Discovery Channel show, "American Hot Rod," which often showed his short-tempered side.

"The show was ridiculous," said Taylor. "I've been in his shop for years and years and I've never seen it like that. I think the show was really contrived. That wasn't Boyd, that wasn't how it worked."

Love him or loathe him, his influence on hot rods and customs cannot be overstated.

"It is my firm belief that Boyd is the founding father of this street-rod movement," said Gary Meadors of the Goodguys. "From the Boyd cars to the Boyd billet aluminum wheels ... that whole smooth look that he brought to street rodding is what set him apart. He took our hobby to a whole other level with all the exposure he got in media outside our world. He was a forerunner, and he will be missed."

Fanshaw said: "He elevated hot rodding into an art form. He raised the visibility of the hobby and gave it a broader acceptance in popular culture by getting his car on the cover of Smithsonian magazine, by working with Mitsubishi on the AlumaCoupe, by showing a car at the New York auto show. It gave the entire market legitimacy."

Foose said: "He is the reason the industry is what it is today. He took what people were doing in their garages and put it into production and really legitimized this hobby into a business. Without him and Lil' John (Buttera) it would still be in garages."