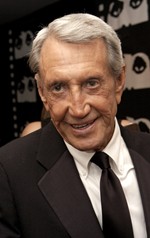 LITTLE ROCK, Ark. (AP) — Roy Scheider, the actor best known for his role as a police chief in the blockbuster movie "Jaws," has died. He was 75.

Scheider died Sunday at the University of Arkansas for Medical Sciences hospital in Little Rock, hospital spokesman David Robinson said. The hospital did not release his cause of death.

However, hospital spokeswoman Leslie Taylor said Scheider had been treated for multiple myeloma at the hospital's Myeloma Institute for Research and Therapy for the past two years.

Scheider and Richard Dreyfuss starred in the 1975 movie, "Jaws," which was widely hailed as the film that launched the era of the Hollywood blockbuster. It was the first film to earn $100 million at the box office.

In 2005, one of Scheider's most famous lines in the movie — "You're gonna need a bigger boat" — was voted No. 35 on the American Film Institute's list of best quotes from U.S. movies.

That year, some 30 years after "Jaws" premiered, hundreds of movie buffs flocked to Martha's Vineyard, off the southeastern coast of Massachusetts, to celebrate the great white shark that terrified millions of moviegoers.

The island's JawsFest '05 also brought back some of the cast and crew, including screenwriter Carl Gottlieb and Peter Benchley, who wrote the novel that inspired Steven Spielberg's enduring classic.

Spielberg, Scheider, who played a police chief, and Dreyfuss, who played an oceanographer, were absent from Jawsfest '05. Co-star Robert Shaw, who played Quint, died in 1978.