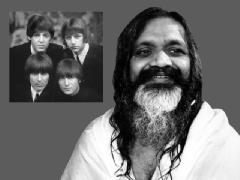 THE HAGUE, Netherlands - Maharishi Mahesh Yogi, a guru to the Beatles who introduced the West to transcendental meditation, died Tuesday at his home in the Dutch town of Vlodrop, a spokesman said. He was thought to be 91 years old.


"He died peacefully at about 7 p.m.," said Bob Roth, a spokesman for the Transcendental Meditation movement that the Maharishi founded. He said his death appeared to be due to "natural causes, his age."

He began teaching TM in 1955 and brought the technique to the United States in 1959. But the movement really took off after the Beatles visited his ashram in India in 1968, although he had a famous falling out with the rock stars when he discovered them using drugs at his Himalayan retreat.

With the help of celebrity endorsements, Maharishi — a Hindi-language title for Great Seer — parlayed his interpretations of ancient scripture into a multi-million-dollar global empire.

After 50 years of teaching, Maharishi turned to larger themes, with grand designs to harness the power of group meditation to create world peace and to mobilize his devotees to banish poverty from the earth.

Director David Lynch, creator of dark and violent films, lectured at college campuses about the "ocean of tranquility" he found in more than 30 years of practicing transcendental meditation.

Some 5 million people devoted 20 minutes every morning and evening reciting a simple sound, or mantra, and delving into their consciousness.

"Don't fight darkness. Bring the light, and darkness will disappear," Maharishi said in a 2006 interview, repeating one of his own mantras.

Donations and the $2,500 fee to learn TM financed the construction of Peace Palaces, or meditation centers, in dozens of cities around the world. It paid for hundreds of new schools in India.

In 1971, Maharishi founded a university in Fairfield, Iowa, that taught meditation alongside the arts and sciences to 700 students and served organic vegetarian food in its cafeterias.

Skeptics ridiculed his plan to raise $10 trillion to end poverty by sponsoring organic farming in the world's poorest countries. They scoffed at his notion that meditation groups, acting like psychic shock troops, can end conflict.

"To resolve problems through negotiation is a very childish approach," he said.

In 1986, two groups founded by his organization were sued in the U.S. by former disciples who accused it of fraud, negligence and intentionally inflicting emotional damage. A jury, however, refused to award punitive damages.

Over the years, Maharishi also was accused of fraud by former pupils who claim he failed to teach them to fly. "Yogic flying," showcased as the ultimate level of transcendence, was never witnessed as anything more than TM followers sitting in the cross-legged lotus position and bouncing across spongy mats.

Maharishi was born Mahesh Srivastava in central India, reportedly on Jan. 12, 1917 — though he refused to confirm the date or discuss his early life.

He studied physics at Allahabad University before becoming secretary to a well known Hindu holy man. After the death of his teacher, Maharishi went into a nomadic two-year retreat of silence in the Himalayan foothills of northern India.

With his background in physics, he brought his message to the West in a language that mixed the occult and science that became the buzz of college campuses. He described TM as "the unified field of all the laws of nature."

Maharishi's trademark flowing beard and long, graying hair appeared on the cover of the leading news magazines of the day.

But aides say Maharishi became disillusioned that TM had become identified with the counterculture, and he spent more time at his ashram in Rishikesh in the Himalayan foothills to run his global affairs.

In 1990 he moved onto the wooded grounds of a historic Franciscan monastery in the southern Dutch village of Vlodrop, about 125 miles southeast of Amsterdam.

Concerned about his fragile health, he secluded himself in two rooms of the wooden pavilion he built on the compound, speaking only by video to aides around the world and even to his closest advisers in the same building.

John Hagelin, a theoretical physicist who ran for the U.S. presidency three times on the Maharishi-backed Natural Law Party, said that from the Dutch location Maharishi had daylong access to followers in India, Europe and the Americas.

"He runs several shifts of us into the ground," said Hagelin, Maharishi's closest aid, speaking in Vlodrop about his then-89-year-old mentor. "He is a fountainhead of innovation and new ideas — far too many than you can ever follow up."