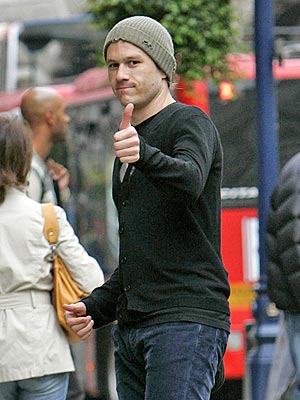 Actor Heath Ledger, who has been found dead at the age of 28, was regarded as one of Hollywood's brightest young stars, with a string of acclaimed films behind him and a major career ahead.

The death of such an admired star at such a young age will cause huge shock among fans, the media and the movie industry.

He shot onto the A list less than three years ago with a lead role in the universally acclaimed Brokeback Mountain, which proved he could shine in emotionally challenging roles as well as comedies and action films.

He played the inarticulate and volatile ranch hand Ennis, who became romantically entangled with a rodeo cowboy, played by Jake Gyllenhaal, in 1960s Wyoming.

It earned him Oscar, Golden Globe and Bafta nominations.

E Annie Proulx, who wrote the story upon which the movie was based, said: "He was so visceral. How did this actor get inside my head so well? He understood more about the character than I did."

HEATH LEDGER'S TOP FILMS
After Brokeback Mountain, Ledger was beginning to win blockbuster roles, and had just finished playing The Joker in the new Batman film The Dark Knight.

A recent trailer showed him playing the character as a sinister villain who proves a match for the superhero, played by Christian Bale.

"When we came to shoot the movie it was a physically and mentally draining role but I thoroughly enjoyed it and this is the most fun I've had with any character," he said.

Ledger was also thought to be in the middle of filming The Imaginarium of Doctor Parnassus, a new fantasy movie with former Monty Python member Terry Gilliam.

Set and shot in modern London, it is the tale of a travelling theatre that takes the audience into a parallel universe.

He has also just been seen in I'm Not There, which saw six actors play characters based on Bob Dylan at different stages of his career.

Ledger said his character Robbie Clark focused on "Dylan's struggle with love and his marriage and divorce and family and balancing being in the media spotlight".

Ledger's other roles have included a heroin addict in Candy in 2006, Gilliam's The Brothers Grimm in 2005 and the title part in 2003's Ned Kelly.

He appeared alongside Halle Berry in the Oscar-winning Monster's Ball in 2001, starred in popcorn movie A Knight's Tale the same year, and was seen alongside Mel Gibson in The Patriot in 2000.

His Hollywood debut came in teen comedy 10 Things I Hate About You and he starred in light-hearted Australian gangster flick Two Hands in 1999.

And like many Australian actors, he had cut his teeth in TV soaps, playing surfer Scott Irwin in Home and Away in 1997.

Ledger was not known as a hellraiser, but was said to have been uncomfortable with fame.

And the spotlight inevitably fell on him during the bad times as well as the good.

He was recently reported to have split from his fiancee Michelle Williams, whom he met when she played his wife in Brokeback Mountain.

They had a daughter, Matilda Rose, in October 2005, but were believed to have parted in late 2007.

Ledger was previously in a couple with another actress, Naomi Watts. Their relationship ended in 2004.

But he will be remembered for his film roles and after establishing himself as one of Hollywood's finest actors under 30, Ledger's life has ended just as his talent was beginning to be fulfilled.