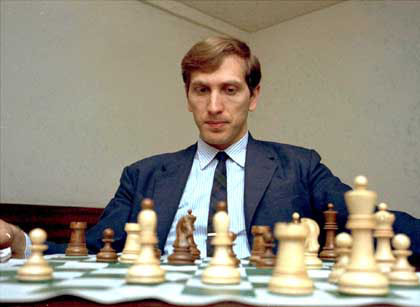 REYKJAVIK, Iceland (AP) -- Bobby Fischer, the reclusive chess master who became a Cold War icon when he dethroned the Soviet Union's Boris Spassky as world champion in 1972, has died aged 64.

Spokesman Gardar Sverrisson said Fischer passed away in a Reykjavik hospital on Thursday. There was no immediate word on cause of death.

United States-born Fischer, a fierce critic of his homeland who renounced his U.S. citizenship, moved to Iceland in 2005.

Fischer told reporters that year that he was finished with a chess world he regarded as corrupt, and he sparred with U.S. journalists who asked about his anti-American tirades.

"The United States is evil. There's this axis of evil. What about the allies of evil -- the United States, England, Japan, Australia? These are the evildoers," Fischer said.

He was born in Chicago but grew up in Brooklyn, New York, and became U.S. chess champion at 14 and a grand master at 15.

Fischer was wanted in the United States for playing a 1992 rematch against Cold War rival Spassky in Yugoslavia in defiance of international sanctions.

He beat Spassky in 1972 in a series of games in Reykjavik to claim America's first world chess championship in more than a century.

The event was given tremendous symbolic importance, pitting the intensely individualistic young American against a product of the grim and soulless Soviet Union.

It also was marked by Fischer's odd behavior -- possibly calculated psychological warfare against Spassky -- that ranged from arriving two days late to complaining about the lighting, TV cameras, the spectators, even the shine on the table.

Spassky said in a brief phone call from France, where he lives, that he was "very sorry" to hear of Fischer's death.

Fischer's reputation as a chess genius was soon eclipsed by his idiosyncrasies.

Fischer was world champion until 1975, when he forfeited the title to another Soviet, Anatoly Karpov.

He dropped out of competitive chess and largely out of view, emerging occasionally to make erratic and often anti-Semitic comments.

Fischer, whose mother was Jewish, once accused "the Jew-controlled U.S. government" of ruining his life.

He then fell into obscurity before resurfacing to win a 1992 exhibition rematch against Spassky on the Yugoslav resort island of Sveti Stefan in violation of sanctions imposed to punish then-President Slobodan Milosevic. Fischer beat Spassky 10-5 to win $3.35 million.

Former Russian chess champion Garry Kasparov said Fischer's ascent of the chess world in the 1960s was "a revolutionary breakthrough" for the game.

"The tragedy is that he left this world too early, and his extravagant life and scandalous statements did not contribute to the popularity of chess," Kasparov said.

Fischer announced he had abandoned chess in 1996 and launched a new version in Argentina, "Fischerandom," a computerized shuffler that randomly distributes chess pieces on the back row of the board at the start of each game.
advertisement

Fischer claimed it would bring the fun back into the game and rid it of cheats.

He acepted the offer of citizenship from Iceland after being detained for nine months in Japan for trying to leave the country using an invalid U.S. passport.