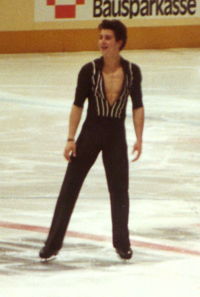 LOS ANGELES -- Christopher Bowman, the former U.S. figure skating champion dubbed "Bowman the Showman" for his flair on the ice, died Thursday of a possible drug overdose, authorities said. He was 40.

Bowman was pronounced dead Thursday at 12:06 p.m., said Coroner's Lt. Joe Bale, who confirmed the death was being investigated as a possible drug overdose, but wasn't immediately able to provide more details. An autopsy was planned for this weekend, he said.

Bowman's body was found by a friend Thursday morning at a Budget Inn in the North Hills area, police Sgt. Francisca Wheeling said.

Flashy-skating Christopher Bowman won the U.S. men's titles in 1989 and 1992 and competed in two Olympics.

"He just passed away in his sleep," Bowman's mother, Joyce, told the Detroit Free Press. "His friend told me that he was fine. He just went to bed and didn't wake up."

Bowman, a former child actor, was one of figure skating's bigger personalities in the late 1980s and early 1990s. Immensely talented, with a gift for performance that few others could match, he won the U.S. men's figure skating titles in 1989 and 1992, and was runner-up in 1987 and 1991.

"If I had to pick the three most talented skaters of all time, I would pick Christopher as one," Brian Boitano, the 1988 Olympic champion, told the Chicago Tribune. "He had natural charisma, natural athleticism, he could turn on a crowd in a matter of seconds and he always seemed so relaxed about it."

But as talented as he was on the ice, Bowman could be just as big a challenge off it. He bounced from coach to coach long before it became fashionable -- he once won Skate America when he was in-between coaches -- and freely admitted that practice was something that just didn't interest him much.

"Each and every competition that I train for, prepare for, is always a personal challenge for me because, as we all know, the training and discipline between each event is very difficult for me," Bowman said in 1992.

He battled drug problems and underwent treatment at least twice -- once before the 1988 Olympics and then again after the Albertville Games in 1992.

He also had run-ins with the law.

In November 2004, he pleaded no contest to two misdemeanors involving having a gun while drunk in Rochester Hills, Mich.

In 1993, while skating with the Ice Capades, he was beaten at a hotel in a seedy neighborhood in Pittsburgh, according to a police report.

"When Todd told me, I said, 'What a shame," Callaghan told the Free Press. "Christopher was such a nice person. Even though he was troubled, he was very genuine and friendly.

"There was a great rivalry between Christopher and Todd because they were so opposite. Christopher was always on; he was the star when it came to doing any competitions. Most of us didn't know how he did it, but he did."

Born in Hollywood, on March 30, 1967, Bowman had a part in the TV series "Little House on the Prairie" for one season and appeared in dozens of commercials. He got into coaching after his skating career was finished, and the Free Press said he had lived in the Detroit area from 1995 until last February.

Recently, Bowman had returned to acting. He had a role as an assistant coach in the upcoming Brian J. De Palma-directed movie "Down and Distance" starring Gary Busey.

Bowman had a daughter with his former wife, Annette Bowman, according to the Free Press.