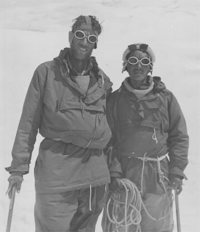 The gangling New Zealander devoted much of his life to aiding the mountain people of Nepal and took his fame in stride, preferring to be called "Ed" and considering himself just an ordinary beekeeper.

"Sir Ed described himself as an average New Zealander with modest abilities. In reality, he was a colossus. He was an heroic figure who not only 'knocked off' Everest but lived a life of determination, humility, and generosity," Clark said in a statement.

"The legendary mountaineer, adventurer, and philanthropist is the best-known New Zealander ever to have lived," she said.

Hillary's life was marked by grand achievements, high adventure, discovery, excitement -- and by his personal humility. Humble to the point that he only admitted being the first man atop Everest long after the death of climbing companion Tenzing Norgay.

He had pride in his feats. Returning to base camp as the man who took the first step onto the top of the world's highest peak, he declared: "We knocked the bastard off."

The accomplishment as part of a British climbing expedition even added luster to the coronation of Britain's Queen Elizabeth II four days later, and she knighted Hillary as one of her first act.

But he was more proud of his decades-long campaign to set up schools and health clinics in Nepal, the homeland of Tenzing Norgay, the mountain guide with whom he stood arm in arm on the summit of Everest on May 29, 1953.