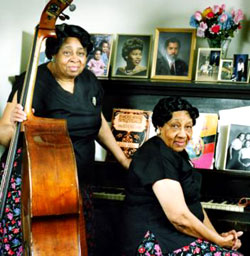 INDIANAPOLIS (AP) — Jazz pianist and singer Aletra Hampton, who performed for years as part of the Hampton Sisters act, has died. She was 92.

Hampton, who had been in failing health for months, died Monday at a rehabilitation center in Indianapolis, said her son, Paul Kerley.

Hampton was born in Ohio in 1915 and began performing in a large family band. Her family moved to Indianapolis in 1938, and with her three sisters she formed the Hampton Sisters while their brothers were fighting in World War II.

She continued to perform in recent years with her younger sister, Virtue Hampton Whitted, who died earlier this year. The two released a CD titled "The Hampton Sisters, a Jazz Tribute" in 2003.