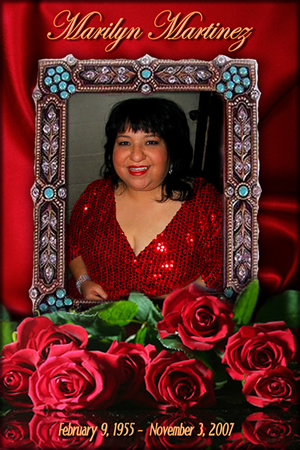 LOS ANGELES (AP) — Marilyn Martinez, a sassy standup comic who performed with the Original Latin Divas of Comedy and other Latina troupes, has died, her husband said Friday. She was 52.

Raised in Denver, Martinez tap-danced on a local television show as a child before funneling her love of acting, and food, into standup routines, according to her longtime manager, Scott Montoya. She moved to Los Angeles around 1989, he said.

Her routines often included frank talk about sex and men.

In L.A., Martinez connected with her Mexican roots and in the mid-1990s joined Latina troupe the Hot and Spicy Mamitas, Montoya said.

She also became a member of the Hot Tamales with Eva Longoria and was "the anchor" of the Latin Divas of Comedy, with a Showtime special earlier this year in the same vein as the hit Latin Kings of Comedy, Montoya said.