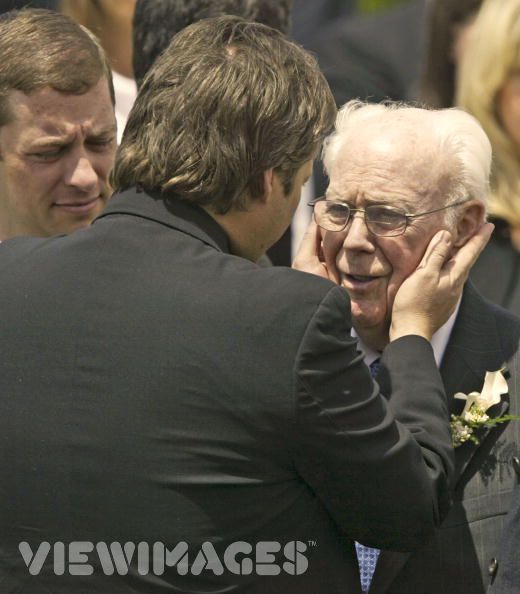 SALT LAKE CITY (AP) -- George Osmond, father of Donny and Marie Osmond and patriarch to the family's singing group The Osmond Brothers, died Tuesday. He was 90.

Family spokesman Kevin Sasaki said Osmond died at his home in Provo, Utah. Because he had not been ill, he likely died from natural causes incident to his age, Sasaki said.

It wasn't immediately clear whether Marie Osmond, a contestant on ABC's "Dancing With the Stars" who fainted following a live performance two weeks ago, would appear on Tuesday night's results segment.

The death was first reported by "Entertainment Tonight's" Web site and was confirmed by the AP through a spokeswoman for The Church of Jesus Christ of Latter-day Saints, of which Osmond was a member.

Marie Osmond performed Monday night on "Dancing With the Stars," with her brother in attendance. She's not the only "Dancing" contestant to have lost a parent this season: actress Jane Seymour missed a show last month after the death of her mother, Mieke Frankenberg.

George Osmond married his wife, Olive on Dec. 1, 1944. She died in 2004. The couple were the parents of nine children, many of whom became singing stars. Alan, Wayne, Merrill, and Jay Osmond first became famous as The Osmond Brothers, a barbershop quartet singing at Disneyland and on The Andy Williams Show.

Donny Osmond joined the group at age 6 and later hosted "The Donny and Marie Show" with his sister. The youngest son, Jimmy Osmond, is also a performer.

A World War II veteran, Osmond also served missions for the Mormon church in Hawaii and the United Kingdom. In his professional life, he worked in real estate, insurance sales and was once the postmaster for the city of Ogden. He gave up his work to manage the singing careers of his children.

Together, Osmond and his wife formed the Osmond Foundation, which later became the Children's Miracle Network, a nonprofit organization that raises funds for children's hospitals.