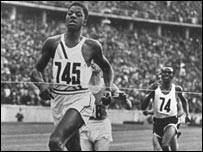 John Woodruff, the black American runner who won the 800 meters in the 1936 Berlin Olympics in the face of Adolf Hitler and his "master race" agenda, has died. He was 92.

Woodruff, the last surviving gold medalist from that U.S. team that included the legendary runner Jesse Owens, died Tuesday at an assisted living center near Phoenix, said Rose Woodruff, his wife of 37 years.

Nicknamed "Long John" for his nearly 10-foot stride, Woodruff was a lanky 21-year-old freshman at the University of Pittsburgh with just three years of competitive running under his belt when he sailed to the racially charged scene in Berlin.

On Aug. 4, 1936, he won the 800 meters using one of the most astonishing tactics in Olympic history. Boxed in by the pack of runners, he literally stopped in his tracks, then moved to the third lane and passed everyone to win the race in 1:52.9.

"I didn't panic," Woodruff told the New York Times in 2005. "I just figured if I had only one opportunity to win, this was it. I've heard people say that I slowed down and almost stopped. I didn't almost stop. I stopped, and everyone else went around me."

He was the first black athlete to win a gold medal at the Berlin Games. His teammate Owens won four.

There were 10,000 people to greet him when he returned to his hometown of Connellsville, Pa., according to an Associated Press account from the time.

"He was happy to bring the honor to the country. That was No. 1," his wife said. "And then to his family and the community where he lived."

Woodruff continued to excel after his return from Europe.

He won three consecutive national 880-yard titles and the national Amateur Athletic Union (AAU) 880 championship in 1939. That same year he broke the 400-meter record at the Compton Relays in California.

An excellent relay runner, he was the first athlete in the history of the Penn Relays at the University of Pennsylvania to anchor three championship relays in one year, which he did first in 1938 and again the next year.

"After the Olympics, I won nearly every major track meet in the country," he told the Associated Press some years ago. "Cumulatively speaking, I felt those achievements meant more to me than the Berlin Games. I got into the Olympics very fast. I didn't realize the importance of what I had accomplished. I didn't even think about it."

But even his Olympic accomplishments could not erase the prejudice he sometimes encountered at home.

At a meet in Dallas in July 1937, Woodruff ran what was then believed to be the fastest 800 meters ever. He did it in 1:47.8, nearly two seconds faster than the previous record. But two days later, local AAU officials suspiciously ruled that the track was six feet short of regulation and the mark was disallowed.

A grandson of slaves, John Youie Woodruff was born July 5, 1915, one of 12 children of Silas and Sarah Woodruff. He started his running career in high school but didn't have the luxury of training on a track because the school didn't have one. Instead, he trained on the school's football field.

He later earned a sociology degree from the University of Pittsburgh and a master's degree, also in sociology, from New York University.

Woodruff twice served in the Army, during World War II and then the Korean War. He left active service in 1957 as a lieutenant colonel but remained in the Army Reserves.

According to the National African American Registry, he commanded two battalions, one of them integrated, and was executive officer for five artillery battalions.

Woodruff had many jobs over his long life.

He and his wife moved to Arizona in 2000 and lived in Fountain Hills. Diabetes led to amputation of his once-powerful legs in 2003.

In addition to his wife, he is survived by a son, John Jr. of Brooklyn, N.Y.; a daughter, Randilyn Gilliam of Chicago; five grandchildren; and three great-grandchildren.