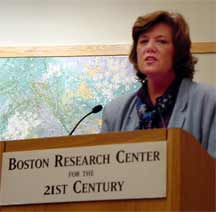 Randall Forsberg, who founded the nuclear freeze movement of the early 1980s and wrote its manifesto, died Oct. 19 of endometrial cancer at a New York City hospital. She was 64.

An arms control expert and political science professor at City College of New York, Forsberg launched the movement in 1980 when she wrote the "Call to Halt the Nuclear Arms Race," a position paper that outlined the devastating potential of the arsenals possessed by the United States and the Soviet Union.

Its simple message -- to improve national and international security by stopping the superpowers' buildup of nuclear weapons -- unified disparate peace groups and sparked a nationwide grass-roots campaign that resonated with middle-class Americans as well as with policymakers in Washington.

"She was a generating, originating and inspiring force" whose ultimate aim was "to roll back war itself," Jonathan Schell, author of the 1982 bestseller about the nuclear dilemma "The Fate of the Earth," said in an interview this week.

After the Reagan administration reopened arms control talks with the Soviets in the mid-1980s -- a change of course that Schell and other historians attribute to the nuclear freeze project -- the movement waned, but Forsberg remained devoted to the cause. For 27 years, she headed the Institute for Defense and Disarmament Studies, a think tank she founded 27 years ago in Brookline, Mass. She advised two presidents on arms control issues and discussed disarmament with Soviet leader Mikhail Gorbachev in 1988.

Her work was recognized in 1983 with a $204,000 MacArthur Foundation "genius award," given annually to individuals who have demonstrated unusual artistic, intellectual or social creativity.

Forsberg was born in 1943 in Huntsville, Ala., and grew up on Long Island in New York. She was the daughter of Larkin Douglass Watson, an actor who appeared for 15 years on the NBC soap opera "Another World."

Although she came of age during an era of social protest, she was never "hooked on protests," she once told People magazine. In 1967, two years after graduating from Barnard College, she married a Swedish social worker and moved to Stockholm, where she found work as a typist for the Stockholm International Peace Research Institute.

The government-funded agency monitored the arms race, a subject that Forsberg knew little about until she began to read what she was typing. The next several years became what she described as "a paid education in what countries were spending" on weapons and what tools of warfare they were buying.

Her marriage dissolved as her concern about the arms race deepened. In 1972 she returned to the U.S. with her daughter, Katarina (who survives her along with her mother and a sister), and enrolled in a doctoral program in political science at the Massachusetts Institute of Technology.

It would take Forsberg more than two decades to complete the degree.

"I learned at MIT that armed force was not just for defense but for influencing the course of world history," she told The Times in 1983. "And I discovered that the peace groups at the time weren't even aware of this. There was a consensus on complaints -- too many weapons, too much testing and too high a military budget -- but no consensus on alternatives. So I had to develop my own."

In 1979 she delivered a speech in Louisville, Ky., in which she declared that the way to stop the arms race "is to stop it. Enough is enough."

Her message struck a chord with the audience, several members of which later approached her about putting it in writing. It occurred to her that broadcasting the freeze idea could focus the peace movement, which had splintered since the end of the Vietnam War.

"Call to Halt the Nuclear Arms Race," published as a pamphlet in the spring of 1980, delineated in chilling prose the threat contained in the U.S. and the Soviet arsenals, which held a total of 50,000 nuclear weapons, with plans to build 20,000 more. The solution, she wrote, was a verifiable and mutual freeze "on the testing, production and deployment of nuclear weapons" and their delivery systems. She portrayed the freeze as the first step in a broader agenda to eventually abolish not only nuclear weaponry but all national military forces.

"Unlike virtually all other arms control proposals, it was strikingly simple, intelligible to the general public as well as to arms control experts," UC Irvine sociologist David S. Meyer wrote in a 1990 history of the movement called "A Winter of Discontent: The Nuclear Freeze and American Politics."

In 1982, freeze initiatives went before voters in eight states and won in seven, including California. Politicians in Washington introduced freeze resolutions in the House and the Senate as national polls showed that more than 70% of Americans favored halting the arms race. A "No Nukes" march and rally in New York City drew nearly 1 million people.

Soon, President Reagan stopped suggesting that the nuclear freeze movement was being directed by Moscow. By the time of his landslide reelection in 1984, he was publicly portraying himself as a nuclear abolitionist.

As U.S.-Soviet relations improved, the movement lost steam, but Forsberg didn't. She ran the Institute for Defense and Disarmament Studies for nearly 30 years on a frugal budget based largely on private donations. When her fundraising fell short, she mortgaged her family home to pay for daily operations.

Through the institute, which she moved to City College last year when she joined its faculty, she published the monthly Arms Control Reporter, widely read in defense and disarmament circles for its updates on arms control negotiations.

She also maintained an international database on arms holdings, production and trade that is considered required reading for defense analysts around the world.

In 2002, after Massachusetts Sen. John F. Kerry appeared to reverse himself by supporting a measure authorizing U.S. military force against Iraq, Forsberg again leaped into action.

Just two weeks before election day, she declared herself a write-in candidate against Kerry, who was running unopposed for a fourth term. She got more than 22,000 votes.