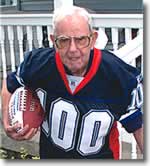 BUFFALO, N.Y. - Sam Dana, who was the oldest living former NFL player and once played football alongside Lou Gehrig at Columbia, died in his sleep late Monday night. He was 104.

Dana had been living with his son, Bob Dana, in Buffalo before spending his final two years at McAuley Residence, an assisted living seniors centre where he would regularly watch his beloved Buffalo Bills on television. He died because of complications from an infection.

"We are beyond sad about the passing of our dad," Bob Dana, told The Associated Press on Tuesday. "But at the same time, you look back on his life and he enjoyed life."

It was a full one for the running back who broke into the then fledgling NFL in 1926 with the Hartford Blues. He played one game with the Blues and then played a full season in 1928 with the New York Yankees, finishing with three catches for 66 yards and one touchdown.

The Yankees folded before the next season and Dana moved on to raise a family and eventually work as a special agent for the IRS before retiring in 1969.

Dana only recently became known as the NFL's oldest living player after there was confusion regarding his name.

He played under the name Sam "Smoke" Salemi before changing it to Dana in 1945. And for many years, NFL historians thought he had died after another former Brooklyn-born player named Salemi died in 1969.

It wasn't until March 2002 when Bob helped correct the error by sending a letter to the Pro Football Hall of Fame, informing them that his father was still alive and living in Buffalo.

"I didn't even know I was missing," Sam Dana said with a smile while visiting the Bills training camp in 2003. "I'm glad they found me."

Dana quickly became a minor celebrity after that. He was invited to attend ceremonies at the Pro Football Hall of Fame and regularly spoke to children about his playing days, Bob Dana said.

It's unclear who now becomes the oldest living former NFLer.

It was at Columbia where Dana played alongside Gehrig, a fullback before he elected to pursue a career in baseball. As a member of the football Yankees, Dana also once caught a pass from Harry Stuhldreher, a member of Notre Dame's celebrated "Four Horsemen."

"Dad often said, 'I wished I asked for the buck back and asked him for an autograph. It might really be worth something," Bob Dana said, with a big laugh.

Sam Dana won over numerous Bills players during his visit to training camp. He spent about a half-hour with former quarterback Drew Bledsoe as the two discussed how the game had changed.

"All of us as players owe a debt of gratitude to the guys that came before us, played the game and made it what it is," Bledsoe said. "They played for the love of the game and established something that we hope to keep continuing on."

Dana noted only one significant difference between the eras.

Dana, who made $100 a game playing for the Yankees, winked and added, "It's nice to play for the money, too."

Bob Dana recalled being with his father as the two watched the Bills beat the Baltimore Ravens, 19-14, on Oct. 21.

"He turned to me, and I'll never forget it, with a sparkle in his eye, he said, 'I love this game. I loved it then and I love it now. And I wish I could still play," Dana said.