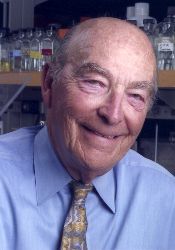 WASHINGTON (Reuters) - Dr. Arthur Kornberg, who won the 1959 Nobel Prize for figuring out how DNA is built, died on Friday of respiratory failure at the age of 89, Stanford University Hospital in California said.

WASHINGTON (Reuters) - Dr. Arthur Kornberg, who won the 1959 Nobel Prize for figuring out how DNA is built, died on Friday of respiratory failure at the age of 89, Stanford University Hospital in California said.

Kornberg, professor emeritus of biochemistry at Stanford's School of Medicine, shared the Nobel Prize in Physiology or Medicine with Dr. Severo Ochoa.

Kornberg was honored for his work synthesizing DNA, the blueprint of heredity, and Ochoa for the synthesis of RNA, the genetic message derived from DNA.

"Dr. Kornberg was one of the most distinguished and remarkable scientists in American medicine," Dr. Philip Pizzo, dean of the Stanford University School of Medicine, said in a statement.

"His towering contributions have continued virtually up until the time of his death."

Kornberg was born in Brooklyn on March 3, 1918. He attended New York public schools, earning his M.D. from the University of Rochester in 1941.

He was a commissioned officer in the U.S. Public Health Service, a uniformed service, serving as a ship's doctor. He also did research at the National Institutes of Health.

"No matter how counterintuitive it may seem, basic research has proven over and over to be the lifeline of practical advances in medicine," Kornberg wrote in 1977.

"Without advances, medicine regresses and reverts to witchcraft."

Kornberg also earned the National Medal of Science in 1979, among other awards. He wrote several books on DNA and biotechnology. His last book -- "Germ Stories" -- will be published on November 15.

Kornberg is survived by his wife, Carolyn Frey Dixon Kornberg, whom he married in 1998, three sons and eight grandchildren. Two previous wives are dead.