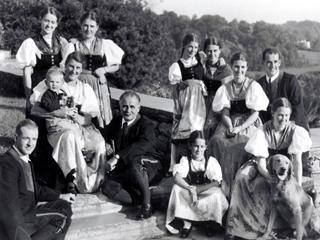 MONTPELIER, Vt. - Werner von Trapp, a member of the musical family made famous by the 1965 movie "The Sound of Music," has died, his family said. He was 91.

MONTPELIER, Vt. - Werner von Trapp, a member of the musical family made famous by the 1965 movie "The Sound of Music," has died, his family said. He was 91.

Von Trapp died Thursday at his home in Waitsfield. The cause of death was not announced. The family confirmed his death, but declined to comment further.

"The Sound of Music" was based loosely on a 1949 book by his stepmother, Maria von Trapp, who died in 1987. It tells the story of an Austrian woman who married a widower with seven children and teaches them music.

Born in 1915 in Zell am See, Austria, von Trapp was the fourth child and second son of Captain Georg von Trapp and his first wife, Agathe Whitehead. In the movie "The Sound of Music," Werner von Trapp was depicted by the character named Kurt.

During the 1930s, von Trapp studied cello and became proficient on several other instruments. He sang tenor with his family's choir, The Trapp Family Singers, who won great acclaim throughout Europe after their debut in 1935.

In 1938, von Trapp and his family escaped from Nazi-occupied Austria. After they arrived in New York, the family became popular with concert audiences. The family eventually settled in Vermont.

During World War II, von Trapp served in Europe with the U.S. Army.

After the war, von Trapp returned to his family's farm in Stowe and resumed touring with the family choir.

After the Trapp Family Singers retired, von Trapp helped to found a music school in Reading, Penn., called the Community School of Music.

Several years later he brought his family back to Vermont and eventually settled on a dairy farm in Waitsfield where he farmed with his family until he retired in 1979. He spent the years after his retirement traveling and weaving, spinning, and crocheting.

He is survived by his wife of 58 years, Erika, and six children. He is also survived by three sisters and one brother.