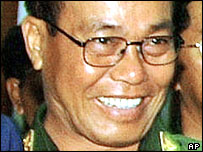 YANGON, Myanmar (AP) -- Prime Minister Gen. Soe Win, reviled for his role in a bloody attack on Myanmar opposition leader Aung San Suu Kyi and her followers in 2003, died Friday after a long illness, relatives and state media said. He was 59 and was said to have been suffering from leukemia.

The fourth-ranking member of the military junta, Soe Win was largely considered a figurehead, and his death was unlikely to cause a change in the regime's grip on power.

His death was reported as the junta continued its crackdown on democracy advocates that followed weeks of protests in the tightly controlled country.

He was nicknamed "the Butcher of Depayin" for his role in the 2003 attack on Suu Kyi and her followers in that northern town.

Details of the attack remain murky, but several dozen of Suu Kyi's supporters were believed killed when a mob of government supporters ambushed her motorcade. Soe Win was seen as masterminding the attack, according to diplomats, rights groups and government critics.

Soe Win first achieved notoriety as one of the officers who brutally suppressed a 1988 pro-democracy uprising, commanding troops around Rangoon University -- a center for demonstrations -- and giving orders to open fire on a crowd of protesters in front of Rangoon General Hospital. Rangoon is the old name for Yangon, Myanmar's largest city.

The current junta seized power that year. It held a general election in 1990, but refused to recognize a landslide victory by the opposition party of Suu Kyi, who won the Nobel Peace Prize in 1991.

Soe Win became prime minister in 2004. He replaced Gen. Khin Nyunt, who was ousted by his hard-line army colleagues and charged with corruption in what was seen as a victory over moderates in the regime.

Lt. Gen. Thein Sein, who has been serving as acting prime minister at least since May, was expected to replace Soe Win. Thein Sein is known as a fierce loyalist of Senior Gen. Than Shwe, the junta leader.

Soe Win was a former air force chief and a commander for the northwestern military region of Myanmar. He joined the junta's inner circle as Secretary-2 in 2003, and was promoted to Secretary-1 in a 2003 shake-up.

Simmering anger with the military's 45-year rule exploded in mid-August after it raised fuel prices by as much as 500 percent, a crushing burden in this impoverished nation. The marches soon ballooned into mass pro-democracy demonstrations led by the nation's revered Buddhist monks. The military crushed the protests on Sept. 26-27.
advertisement

The government says 10 people were killed in the violence. But dissident groups put the death toll at up to 200. They say 6,000 people were detained, and that arrests continue.

Soe Win, who had been treated in Singapore for his illness, returned to Myanmar on Sept. 30. He is survived by his wife, and their son and daughter. Soe Win's twin brother died on Sept. 19.