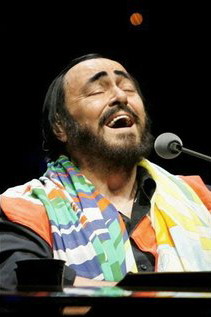 ROME (AP) -- Luciano Pavarotti, whose vibrant high C's and ebullient showmanship made him the most beloved and celebrated tenor since Caruso and one of the few opera singers to win crossover fame as a popular superstar, died Thursday. He was 71.


His manager, Terri Robson, told the AP in an e-mailed statement that Pavarotti died at his home in Modena, Italy, at 5 a.m. local time. Pavarotti had been diagnosed with pancreatic cancer last year and underwent further treatment in August.

"The Maestro fought a long, tough battle against the pancreatic cancer which eventually took his life. In fitting with the approach that characterised his life and work, he remained positive until finally succumbing to the last stages of his illness," the statement said.

For serious fans, the unforced beauty and thrilling urgency of Pavarotti's voice made him the ideal interpreter of the Italian lyric repertory, especially in the 1960s and '70s when he first achieved stardom. For millions more, his charismatic performances of standards like "Nessun Dorma" from Puccini's "Turandot" came to represent what opera is all about.

In fact, "Nessun Dorma" was Pavarotti's last performance, sung at at the opening ceremony of the Winter Olympics in Turin, Italy, in February 2006. His last full-scale concert was in Taipei in, December 2005.

It was the second monumental loss in the opera world in recent months. American soprano Beverly Sills, whose widespread popularity mirrored Pavarotti's, died July 2 at her home in New York. She was 78 and suffered from cancer.

Instantly recognizable from his charcoal black beard and tuxedo-busting girth, Pavarotti radiated an intangible magic that helped him win hearts in a way Placido Domingo and Jose Carreras - his partners in the "Three Tenors" concerts - never quite could.

"I always admired the God-given glory of his voice - that unmistakable special timbre from the bottom up to the very top of the tenor range," Domingo said in a statement from Los Angeles.

"I also loved his wonderful sense of humor and on several occasions of our concerts with Jose Carreras - the so-called Three Tenors concerts - we had trouble remembering that we were giving a concert before a paying audience, because we had so much fun between ourselves," he said.

Pavarotti, who seemed equally at ease singing with soprano Joan Sutherland as with the Spice Girls, scoffed at accusations that he was sacrificing his art in favor of commercialism.

"The word commercial is exactly what we want," he said, after appearing in the widely publicized "Three Tenors" concerts. "We've reached 1.5 billion people with opera. If you want to use the word commercial, or something more derogatory, we don't care. Use whatever you want."

In the annals of that rare and coddled breed, the operatic tenor, it may well be said the 20th century began with Enrico Caruso and ended with Pavarotti. Other tenors - Domingo included - may have drawn more praise from critics for their artistic range and insights, but none could equal the combination of natural talent and personal charm that so endeared Pavarotti to audiences.

"Pavarotti is the biggest superstar of all," the late New York Times music critic Harold Schonberg once said. "He's correspondingly more spoiled than anybody else. They think they can get away with anything. Thanks to the glory of his voice, he probably can."

In his heyday, he was known as the "King of the High C's" for the ease with which he tossed off difficult top notes. In fact it was his ability to hit nine glorious high C's in quick succession that first turned him into an international superstar singing Tonio's aria "Ah! Mes amis," in Donizetti's "La Fille du Regiment" at New York's Metropolitan Opera in 1972.

In the 1990s, Pavarotti's teaming with Domingo and Carreras became a music business phenomenon and spawned copycats such as the Three Irish Tenors.

Pavarotti starred in a film called "Yes, Giorgio" (though its failure scuttled his hopes for a Hollywood career) and appeared in a filmed version of "Rigoletto." He wrote an autobiography, "I, Luciano Pavarotti," and made more than 90 recordings.

From Beijing to Buenos Aires, people immediately recognized his incandescent smile and lumbering bulk, clutching a white handkerchief as he sang arias and Neapolitan folk songs, pop numbers and Christmas carols for hundreds of thousands in outdoor concerts.

His name seemed to show up as much in gossip columns as serious music reviews, particularly after he split with Adua Veroni, his wife of 35 years and mother of their three daughters, and then took up with his 26-year-old secretary in 1996.

In late 2003, he married Nicoletta Mantovani in a lavish, star-studded ceremony. Pavarotti said their daughter Alice, nearly a year old at the time of the wedding, was the main reason he and Mantovani finally wed after years together.

In the latter part of his career, some music critics cited what they saw as an increasing tendency toward the vulgar and the commercial.

He came under fire for canceling performances or pandering to the lowest common denominator in his choice of programs, or for the Three Tenors tours and their millions of dollars in fees.

He was criticized for lip-synching at a concert in Modena, Italy, his hometown. An artist accused him of copying her works from a how-to-draw book and selling the paintings.

The son of a baker who was an amateur singer, Pavarotti was born Oct. 12, 1935, in Modena. He had a meager upbringing, though he said it was rich with happiness.

"Our family had very little, but I couldn't imagine one could have any more," Pavarotti said.

As a boy, Pavarotti showed more interest in soccer than his studies, but he also was fond of listening to his father's recordings of tenor greats like Beniamino Gigli, Tito Schipa, Jussi Bjoerling and Giuseppe Di Stefano, his favorite.

Among his close childhood friends was Mirella Freni, who would eventually become a soprano and an opera great herself. The two studied singing together and years later ended up making records and concerts together, according to Elvio Giudici, an Italian opera critic.

In his teens, Pavarotti joined his father, also a tenor, in the church choir and local opera chorus. He was influenced by the American movie actor-singer Mario Lanza.

"In my teens I used to go to Mario Lanza movies and then come home and imitate him in the mirror," Pavarotti said.

Singing was still nothing more than a passion while Pavarotti trained to become a teacher and began working in a school.

But at 20, he traveled with his chorus to an international music competition in Wales. The Modena group won first place, and Pavarotti began to dedicate himself to singing.

With the encouragement of his then fiancee, Adua Veroni, he started lessons, selling insurance to pay for them. He studied with Arrigo Pola and later Ettore Campogalliani.

In 1961, Pavarotti won a local voice competition and with it a debut as Rodolfo in Puccini's "La Boheme."

He followed with a series of successes in small opera houses throughout Europe before his 1963 debut at Covent Garden in London, where he stood in for Di Stefano as Rodolfo.

Having impressed conductor Richard Bonynge, Pavarotti was given a role opposite Bonynge's wife, soprano Joan Sutherland, in a Miami production of "Lucia di Lamermoor." They subsequently signed him for a 14-week tour of Australia.

It was the recognition Pavarotti needed to launch his career. He also credited Sutherland with teaching him how to breathe correctly.

In the following years, Pavarotti made a series of major debuts, appearing at La Scala in Milan in 1965, San Francisco in 1967 and New York's Metropolitan Opera House in 1968. Other early venues included Vienna, Paris and Chicago.

Throughout his career, Pavarotti struggled with a much-publicized weight problem. His love of food caused him to balloon to a reported high of 396 pounds in 1978.

"Maybe this time I'll really do it and keep it up," he said during one of his constant attempts at dieting.

Pavarotti, who had been trained as a lyric tenor, began taking on heavier dramatic tenor roles, such as Manrico in Verdi's "Trovatore" and the title role in "Otello."

Pavarotti often drew comparisons with Domingo, his most notable contemporary. Aficionados judged Domingo the more complete and consistent musician, but he never captured the public imagination like Pavarotti.

Though there appeared to be professional jealousy between the great singers, Pavarotti claimed he preferred to judge himself only against his earlier performances.

In the mid-1970s, Pavarotti became a true media star. He appeared in television commercials and began appearing in hugely lucrative mega-concerts outdoors and in stadiums around the world. Soon came joint concerts with pop stars. A concert in New York's Central Park in 1993 drew 500,000 fans.

In 1990, he appeared with Domingo and Carreras in a concert at the Baths of Caracalla in Rome for the end of soccer's World Cup. The concert was a huge success, and the record known as "The Three Tenors" was a best-seller and was nominated for two Grammy awards. The video sold over 750,000 copies.

The three-tenor extravaganza became a mini-industry. With a follow-up album recorded at Dodger Stadium in Los Angeles in 1994, the three have outsold every other performer of classical music. A 1996 tour earned each tenor an estimated $10 million.

Pavarotti liked to mingle with pop stars in his series of charity concerts, "Pavarotti & Friends," held annually in Modena. He performed with artists as varied as Ricky Martin, James Brown and the Spice Girls.

The performances raised some eyebrows but he always shrugged off the criticism.

It was not just his annual extravaganza that saw Pavarotti involved in humanitarian work.

During the 1992-95 Bosnia war, he collected humanitarian aid along with U2 lead singer Bono, and after the war he financed and established the Pavarotti Music Center in the southern city of Mostar to offer Bosnia's artists the opportunity to develop their skills.

He performed at benefit concerts to raise money for victims of tragedies such as an earthquake in December 1988 that killed 25,000 people in northern Armenia.

Pavarotti was also dogged by accusations of tax evasion, and in 2000 he agreed to pay nearly roughly $12 million to the Italian state after he had unsuccessfully claimed that the tax haven of Monte Carlo rather than Italy was his official residence.

Pavarotti always denied wrongdoing, saying he paid taxes wherever he performed. But, upon agreeing to the settlement, he said: "I cannot live being thought not a good person."

Pavarotti was preparing to leave New York in July 2006 to resume a farewell tour when doctors discovered a malignant pancreatic mass, his manager Robson said at the time. He underwent surgery in a New York hospital, and all his remaining 2006 concerts were canceled.

Pancreatic cancer is one of the most dangerous forms of the disease, though doctors said the surgery offered improved hopes for survival.

"I was a fortunate and happy man," Pavarotti told Italian daily Corriere della Sera in an interview published about a month after the surgery. "After that, this blow arrived."

"And now I am paying the penalty for this fortune and happiness," he told the newspaper.

Fans were still waiting for a public appearance a year after his surgery. In the summer, Pavarotti taught a group of selected students and worked on a recording of sacred songs, a work expected to be released in early 2008, according to his manager. He mostly divided his time between his home town, Modena, and his villa in the Adriatic seaside resort of Pesaro.

Faced with speculation that the tenor was near death, Mantovani, his second wife, told Italian newspaper La Stampa in July 2007: "He's fighting like a lion and he has never lost his heart."

Pavarotti had three daughters with his first wife, Lorenza, Cristina and Giuliana; and one, Alice, with his second wife.

At his side when he died were his wife, Nicoletta; his four daughters; his sister, Gabriela; his nephews and close relatives and friends, Robson said.

© 2007 The Associated Press. All rights reserved. This material may not be published, broadcast, rewritten or redistributed. Learn more about our Privacy Policy.