Leona Helmsley Is Dead at 87 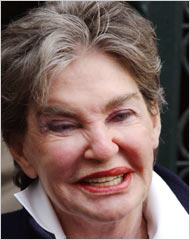 Leona Helmsley, the hotel operator and real estate developer whose conviction on federal tax evasion charges in 1989 became an emblem of the excesses of the 1980s, died today at her summer house in Greenwich, Conn., according Howard J. Rubenstein, her longtime spokesman. She was 87.

The cause of death was heart failure, Mr. Rubenstein said in a statement.

In 1968, Mrs. Helmsley, already a millionaire and a successful condominium broker, met the real estate magnate Harry B. Helmsley. They married in 1972. Together, they built a real-estate empire that included landmark buildings like 230 Park Avenue and the Empire State Building, the Tudor City apartment complex on the East Side of Manhattan, and Helmsley-Spear, their management and leasing business. The couple developed properties that included the Park Lane Hotel, the New York Helmsley Hotel and the Helmsley Palace Hotel, and hotels in Florida and other states.

Mr. Helmsley, who died in 1997, got his start in the 1920s as a broker and rent collector in rough Manhattan neighborhoods like Hell’s Kitchen, scavanging properties at tax sales and buying foreclosed properties from distressed banks during the Depression. His leap in fortunes occurred in the 1950s after he met Lawrence A. Wien, a lawyer who had pioneered the use of syndicates to buy and hold properties while protecting them from high corporate tax rates.

“Leona was a great businesswoman in her own right who created a tremendous brand and success with Helmsley Hotels and was a wonderful partner and wife to Harry Helmsley,” Mr. Rubenstein said in a statement. “She was extremely generous as a philanthropist and she gave tens of millions of dollars to charity right up until the last months of her life. I was very proud to represent her for so many years. Her family and many friends and business associates are deeply saddened by her death and will miss her greatly.”

After Mr. Helmsley’s death in 1997, she became chief executive officer of Helmsley Enterprises and managed the family’s real estate and hotel portfolio.

“At her death she owned a significant commercial and residential real estate and hotel portfolio, including interests in the Empire State Building and the Lincoln Building, the Park Lane Hotel on Central Park South, the Helmsley Hotel on 42nd Street and other significant holdings in New York and Florida,” according to Mr. Rubenstein.

Mrs. Helmsley was born in Ulster County, N.Y., in 1920 and and raised in Brooklyn. As a teenager, she worked as a model and held other part-time jobs before being a secretary at a real estate company. She became a broker at the firm of Brown Harris Stevens, specializing in residential sales, and in particular on condominiums.

Mrs. Helmsley devoted much of her recent years to burnishing her tarnished reputation. She contributed $25 million to NewYork-Presbyterian Hospital, $5 million to Hurricane Katrina relief efforts and $5 million to help the families of firefighters after 9/11, according to Mr. Rubenstein. She also gave money in the late 1990s to help rebuild African-American churches that had been burned down in the South. Buildings at New York University Medical Center and Greenwich Hospital in Connecticut are among those that were renamed to honor the Helmsleys’ generosity.

Mrs. Helmsley is survived by her brother, Alvin Rosenthal, and his wife Susan; four grandchildren, David Panzirer, Craig Panzirer, Walter Panzirer and Megan Wesolko; and 12 great-grandchildren. Funeral arrangements have not yet been announced.