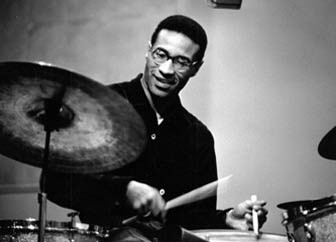 NEW YORK - By his 30th birthday, Max Roach was already considered the greatest jazz drummer ever by his peers. By the time he died this week, the 83-year-old master percussionist was known worldwide as much more: innovator, activist, teacher, genius.

Roach, whose rhythmic innovations and improvisations defined bebop jazz during a career marked by expectations defied and musical boundaries ignored, died late Wednesday in a Manhattan hospital after a long illness.

No additional details were available, said Cem Kurosman, spokesman for Blue Note Records, where Roach played on seminal recordings with Thelonius Monk, Duke Ellington and Miles Davis. Roach was elected to the Downbeat magazine Hall of Fame in 1980, and the Grammy Hall of Fame 15 years later.

"Max was one of the founders and original members of the A-Team of bebop," said fellow music legend Quincy Jones. "Outside of losing a giant and an innovator, I've lost a great, great friend. Thank God he left a piece of his soul on his recordings so that we'll always have a part of him with us."

In 1988, he became the first jazz musician ever honored with a MacArthur Fellowship — receiving a $372,000 "genius grant."

The creatively restless Roach, who debuted with Ellington's band as a self-taught 16-year-old drummer in 1940, challenged his listeners and himself by making music that connected the jazz of the pre-World War II era with the beats of the hip-hop generation.

His place in the pantheon of jazz greats long since secured, Roach collaborated with drummers from around the world, with a string quartet that featured daughter Maxine, and with rapper Fab Five Freddy.

"I try to show my students the correlation between hip-hop and Louis Armstrong," he once said. "That's how well-rooted hip-hop is, coming out of an environment where people were denied any kind of cultural enrichment."

The North Carolina native was born on Jan. 10, 1924, and moved to Brooklyn with his family four years later. A player piano left by the previous tenants gave Roach his musical introduction.

But he was looking for another instrument while singing with the children's choir at the Concord Baptist Church. Roach found a snare drum, and was quickly hooked. His father gave the eighth-grader his first set of drums, and Roach was drumming professionally while still in high school.

He would take often the nickel train ride from Brooklyn to Harlem, listening to the music spilling out of the Apollo Theater or the Savoy Ballroom. While there, he befriended saxophonist Charlie Parker and trumpeter Dizzie Gillespie as the burgeoning bop movement took flight. By 1942, he was playing behind Parker in a Harlem after-hours club; two years later, Roach joined Gillespie and Coleman Hawkins in one of the first bebop recording sessions.

What distinguished Roach from other drummers were his fast hands and ability to simultaneously maintain several rhythms. By layering different beats and varying the meter, Roach pushed jazz beyond the boundaries of standard 4/4 time. His dislocated beats helped define bebop.

Roach's innovative use of cymbals for melodic lines, and tom-toms and bass drums for accents, helped elevate the percussionist from mere timekeeper to featured performer — on a par with the trumpeter and saxophonist.

"One of the grand masters of our music," Gillespie once said.

Through the jazz upheaval of the 1940s and '50s, Roach played bebop with the Charlie Parker Quintet and cool bop with the Miles Davis Capitol Orchestra. He joined trumpeter Clifford Brown in playing hard bop, a jazz form that maintained bebop's rhythmic drive while incorporating the blues and gospel.

Around this time, a panel of 100 jazz musicians voted Roach the greatest jazz drummer ever.

But bad times were lurking. Roach watched several friends — including Parker — die from heroin addiction. He was further devastated when Brown and Powell died in a 1956 car accident, slipping into his own battle with drugs and alcohol.

Roach rebounded with the help of his first wife and frequent collaborator, singer Abbey Lincoln. The couple, married in 1962, split after eight years.

Roach re-emerged in the free jazz era with a new political consciousness, becoming one of jazz's loudest voices for civil rights. Albums like "We Insist! Max Roach's Freedom Now Suite," released in 1960 to celebrate the upcoming centennial of the Emancipation Proclamation, reflected his support of black activism.

Roach eventually expanded his repertoire and explored new challenges. He taught at the University of Massachusetts, traveled to Ghana in search of new music, and performed with groups from Japan and Cuba.

He also formed an all-percussion ensemble known as M'Boom, an ensemble of eight pecussionists; a quartet that performed with a 22-member gospel choir; and a double quartet — his band, plus a string quartet — that included Roach's daughter Maxine Roach on viola. Ignoring critics, Roach insisted rap had a place on music's "boundless palette."

He was survived by five children: sons Daryl and Raoul, and daughters Maxine, Ayo and Dara.