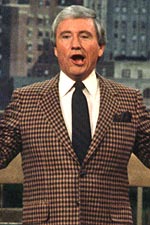 (CBS) LOS ANGELES Talk show host, game show king and entertainment icon Merv Griffin has died of prostate cancer, according to a statement from his family. He was 82 years old.

Griffin, who has had a home in La Quinta, Calif. for the past 20 years, was admitted to Cedars-Sinai Medical Center in Los Angeles in mid-July after a recurrence of the prostate cancer he battled in 1996.

From his beginning as a $100-a-week San Francisco radio singer, Griffin moved on as vocalist for Freddy Martin's band, sometime film actor in films and TV game and talk show host. His "The Merv Griffin Show" lasted more than 20 years, and Griffin's said his capacity to listen contributed to his success.

"If the host is sitting there thinking about his next joke, he isn't listening," Griffin reasoned in a recent interview.

But his biggest break financially came from inventing and producing "Jeopardy" in the 1960s and "Wheel of Fortune" in the 1970s. After they had become the hottest game shows in television, Griffin sold the rights to Coca-Cola for $250 million in 1986, retaining a share of the profits.

After they became the hottest game shows in television, Griffin sold the rights to them to the Columbia Pictures Television Unit for $250 million, retaining a share of the profits. He started spreading the sale money around in treasury bonds, stocks and other investments.

He made Forbes' list of richest Americans several times and started putting money in treasury bonds, stocks and other investments. But he went into real estate and other ventures because "I was never so bored in my life."

"I said, `I'm not going to sit around and clip coupons for the rest of my life,' " he recalled in 1989. "That's when Barron Hilton said, `Merv, do you want to buy the Beverly Hilton?' I couldn't believe it."

Griffin bought the slightly passe hotel for $100.2 million and completely refurbished it for $25 million. Then he made a move for control of Resorts International, which operated hotels and casinos from Atlantic City to the Caribbean.

"I love the gamesmanship," he told Life magazine in 1988. "This may sound strange, but it parallels the game shows I've been involved in."

It was in 1948 that Martin hired Griffin to join his band at Los Angeles' Coconut Grove at $150 a week. With Griffin doing the singing, the band had a smash hit with "I've Got a Lovely Bunch of Cocoanuts," a 1949 novelty song sung in a cockney accent.

The band was playing in Las Vegas when Doris Day and her producer husband, Marty Melcher, were in the audience. They recommended him to Warner Bros., which offered a contract. After a bit in "By the Light of the Silvery Moon," starring Day and Gordon MacRae, he had a bigger role with Kathryn Grayson in "So This Is Love." A few more trivial roles followed, then he asked out of his contract.

In 1954, Griffin went to New York where he appeared in a summer replacement musical show on CBS-TV, a revival of "Finian's Rainbow," and a music show on CBS radio. He followed with a few game show hosting jobs on TV, notably "Play Your Hunch," which premiered in 1958 and ran through the early 1960s. His glibness led to stints as substitute for Jack Paar on "Tonight."

When Paar retired in 1962, Griffin was considered a prime candidate to replace him. Johnny Carson was chosen instead. NBC gave Griffin a daytime version of "Tonight," but he was canceled for being "too sophisticated" for the housewife audience.

In 1965, the Westinghouse Broadcasting introduced "The Merv Griffin Show" in syndicated TV. At last Griffin had found the forum for his talents. He never underestimated the intelligence of his audience, offering such figures as philosopher Bertrand Russell, Pablo Casals and Will and Ariel Durant as well as movie stars and entertainers.

With Carson ruling the late-night roost on NBC in the late 1960s, the two other networks challenged him with competing shows, Griffin on CBS, Joey Bishop (later Dick Cavett) on ABC. Nothing stopped Carson, and Griffin returned to Westinghouse.

Meanwhile, Griffin sought new enterprises for his production company. A lifelong crossword puzzle fan, he devised a game show "Word for Word," in 1963. It faded after one season, then his wife, Julann, suggested another show.

"Julann's idea was a twist on the usual question-answer format of the quiz shows of the Fifties," he wrote in his autobiography "Merv." "Her idea was to give the contestants the answer, and they had to come up with the appropriate question."

"Jeopardy," begun in 1964, became a huge moneymaker for Griffin, as did a more conventional game show, "Wheel of fortune," starting in 1975.

Mervyn Edward Griffin Jr. was born in San Mateo, south of San Francisco on July 6, 1925, the son of a stockbroker. His aunt, Claudia Robinson, taught him to play piano at age 4, and soon the boy was staging shows on the back porch of the family home.

"Every Saturday I had a show, recruiting all the kids in the block as either stagehands, actors and audience, or sometimes all three," he wrote in his 1980 autobiography. "I was the producer, always the producer."

After studying at San Mateo Junior College and the University of San Francisco, Griffin quit school to apply for a job as pianist at radio station KFRC in San Francisco. The station needed a vocalist instead. He auditioned and was hired.

Griffin was billed as "the young romantic voice of radio." He attracted the interest of RKO studio boss William Dozier, who was visiting San Francisco with his wife, Joan Fontaine.

"As soon as I walked in their hotel room, I could see their faces fall," the singer recalled. He weighed 235 pounds. Shortly afterward, singer Joan Edwards told him: "Your voice is terrific, but the blubber has got to go." Griffin slimmed down, and he would spend the rest of his life adding and taking off weight.

Griffin and Julann Elizabeth Wright were married in 1958, and a son, Anthony, was born the following year. The couple divorced in 1973 because of "irreconcilable differences."

"It was a pivotal time in my career, one of uncertainty and constant doubt," he wrote in the autobiography. "So much attention was being focused on me that my marriage felt the strain."