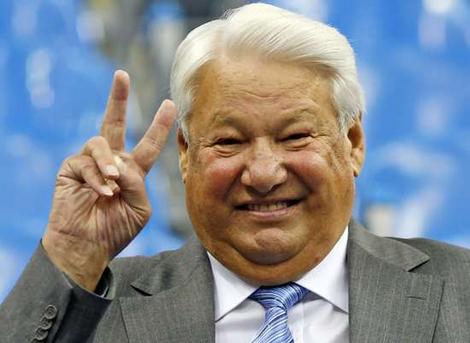 MOSCOW, Russia -- Former Russian President Boris Yeltsin has died at the age of 76, the Kremlin said on Monday.

The Kremlin said his funeral would take place amid a day of national mourning on Wednesday, The Associated Press reported.

Former Soviet President Gorbachev said Monday: "I express my deep condolences to the family of the departed. He did a lot for this country, even though he committed serious errors. A tragic fate."

One of the images most associated with Yeltsin is that of him sitting on a tank during the raucous street rallies that marked the coup attempt.

"I think that is the image that he would like people to have forever," former Yeltsin adviser Alexander Nekrassov told CNN Monday.

But just two years later, he ordered tanks to storm the Russian White House to oust barricaded deputies who dug in after Yeltsin dissolved parliament, accusing it of blocking reforms.

In a later interview, Gorbachev accused Yeltsin of "trampling on democracy."

"[Many] Russians who lived under his power didn't think much of him," Chance said.

A large part of the population blamed him for the overall demise of Russia, Chance said.

In December 1994, Yeltsin sent tanks to stop the fighting in Chechnya in what would become a 21-month conflict. Later he said he couldn't tolerate the "disintegration of Russia," and acknowledged his actions might have been a mistake.

"I feel the pain of every mother's family," Yeltsin said. "My heart bleeds for every victim. It makes me sleepless at night, and no one can help me with that."

Chance said Yeltsin talked about the war in Chechnya as his biggest regret adding that Yeltsin said he felt responsible for the deaths of the Russian soldiers in Chechnya.

Other people remember the more positive aspects of Yeltsin's reign. He played a large part in the demise of the Soviet Union and promoted democratic reform in Russia.

While he was an ideological man who took positive steps to reform his country, Chance said Yeltsin was an inconsistent reformer.

"He was a totally imperfect statesman and certainly had many failings," Chance said.

Yeltsin favored privatization but sweeping corruption put the vast majority of wealth in the hands of a few individuals who "wielded enormous political power." Chance said this upset and angered many Russians who were left with nothing.

Dougherty said everything about Yeltsin was larger than life.

"He was oversized, he was huge, everything about him -- he was physically a giant, a big-barrel chest of complete charisma," she said. "When you met him or were around him he was absolutely charismatic. ... He was an intensely sophisticated politician."

While Yeltsin may have been a failed statesman, Dougherty said he had a unique ability to connect with people.

"He was able to -- in the late 1980s, early 1990s -- tap into something that was afoot in Russia. He was able to emotionally connect with people in a way few politicians have ever been able to do."

From Washington, President Bush and first lady Laura Bush also offered their sympathies. "President Yeltsin was an historic figure who served his country during a time of momentous change," Bush said in a written statement.

"He played a key role as the Soviet Union dissolved, helped lay the foundations of freedom in Russia and became the first democratically elected leader in that country's history.

"We offer our sincerest condolences to the Yeltsin family and to the Russian people," the president said.

"He was a remarkable man who saw the need for democratic and economic reform and in defending it played a vital role at a crucial time in Russia's history," Blair said.

"Boris Yeltsin was a great personality in both Russian and international politics, a brave fighter for democracy and freedom and a true friend of Germany. His contribution to the development of our relations between our two nations will never be forgotten. We will honor him in our thoughts."

Yeltsin had a darker side as well that included embarrassing incidents in which he appeared to be drunk. In Berlin in 1994, he grabbed a baton from a conductor and tried to direct an orchestra while singing and stumbling.