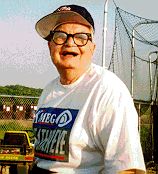 Brooklyn-born Calvert DeForest, who was 85, died Monday at a hospital on Long Island, the Letterman show announced Wednesday.

He made dozens of appearances on Letterman's shows from 1982 through 2002, handling a variety of twisted duties: singing a duet with Sonny Bono on "I Got You, Babe"; doing a Mary Tyler Moore impression during a visit to Minneapolis, Minnesota, where her 1970s show was set; handing out hot towels to arrivals at New York's Port Authority Bus Terminal.

"Everyone always wondered if Calvert was an actor playing a character, but in reality he was just himself -- a genuine, modest and nice man," Letterman said in a statement. "To our staff and to our viewers, he was a beloved and valued part of our show, and we will miss him."

DeForest's gnomish face was the first to greet viewers when Letterman's NBC show debuted on Feb. 1, 1982, offering a parody of the prologue to the Boris Karloff film "Frankenstein."

"It was the greatest thing that had happened in my life," he once said of his first Letterman appearance.

DeForest, given the nom de tube of Larry "Bud" Melman, became a program regular. The collaboration continued when the talk show host moved to CBS to launch "Late Show with David Letterman" in 1994.

The Melman character opened Letterman's first CBS show, too -- but used his real name because of a dispute with NBC over "intellectual property." DeForest, positioned inside the network's familiar eye logo, announced, "This is CBS!"

DeForest often drew laughs by his bizarre juxtaposition as a "Late Show" correspondent at events such as the 1994 Winter Olympics in Norway and the Woodstock anniversary concert that year.

His last appearance on "Late Show" came in 2002, celebrating his 81st birthday.

DeForest also appeared in an assortment of other television shows and films, including "Nothing Lasts Forever" with Bill Murray and Dan Aykroyd.

There will be no funeral service for DeForest, who left no survivors.