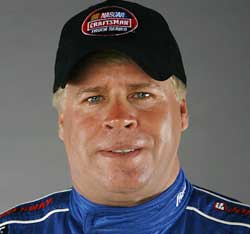 NASCAR driver Bobby Hamilton, a Nashville native who won the Talladega 500 in 2001, died Sunday (Jan. 7) from complications of cancer. He was 49.

He qualified for his first Winston Cup race in 1989 with a car used in the movie, Days of Thunder, and went on to make 371 starts and win four races in what is now the Nextel Cup series. In the NASCAR truck series, he won the 2004 Craftsman Truck championship in his own truck, the first owner-driver to do so since 1992. He also owned a race shop, Bobby Hamilton Racing, in Mount Juliet, Tenn., near Nashville, and was known in the NASCAR community for being down-to-earth and generous. Hamilton is survived by his wife, Lori, and their son, Bobby Hamilton Jr., who is also a NASCAR driver.