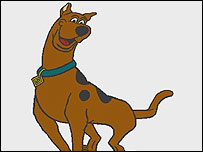 Iwao Takamoto, the US animator who created cartoon dogs Scooby-Doo and Muttley, has died aged 81.

He was responsible for characters from The Flintstones and The Jetsons when he worked for the Hanna-Barbera studio.

And he assisted in the design of films including Peter Pan, 101 Dalmatians and Cinderella, during a career spanning more than six decades.

Mr Takamoto was a vice-president at Warner Bros Animation at the time of his death, caused by heart failure.

He said he created Scooby-Doo after talking to someone who looked after Great Danes.

The dog breeder showed him pictures and "talked about the important points of a Great Dane, like a straight back, straight legs, small chin and such", Mr Takamoto explained.

"I decided to go the opposite [way] and gave him a hump back, bowed legs, big chin and such. Even his colour is wrong."

The character was named after a scat-style phrase at the end of Frank Sinatra's song Strangers in the Night, which contained the phrase "dooby-doo".

He received informal training in illustration techniques from fellow Japanese-Americans in a prison camp, where he spent part of World War II.

His death occurred less than a month after that of Hanna-Barbera co-founder Joseph Barbera, who was 95.