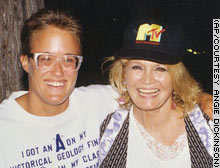 Nikki Bacharach, 40, suffered from Asperger's Disorder, a form of autism. She killed herself Thursday night at her condo, said Linda Dozoretz, a spokeswoman for the family.

"She quietly and peacefully committed suicide to escape the ravages to her brain brought on by Asperger's," the statement said. (More on Asperger's. )

Born prematurely in 1966, Lea Nikki Bacharach studied geology at Cal Lutheran University, but could not pursue a career in the field because of poor eyesight.

It was the second marriage for both Bacharach, the Oscar-winning composer of "Raindrops Keep Falling on My Head," and "What the World Needs Now is Love," and Dickinson, star of the film "Dressed to Kill" and the TV show "Police Woman."

Bacharach has three children from other marriages.