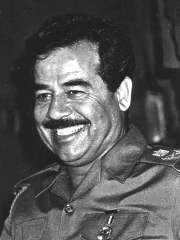 Saddam Hussein, the former Iraqi dictator who spent his last years in captivity after his ruthless Baathist regime was toppled from power by the U.S.-led coalition in 2003, was hanged Saturday for crimes committed in a brutal crackdown during his reign, a witness said.

BAGHDAD, Iraq (CNN) -- Saddam Hussein, the former Iraqi dictator who spent his last years in captivity after his ruthless Baathist regime was toppled from power by the U.S.-led coalition in 2003, was hanged Saturday for crimes committed in a brutal crackdown during his reign, a witness said.

"Saddam's body is in front me," said an official in the prime minister's office when CNN telephoned. "It's over."

In the background, Shiite chanting could be heard. When asked about the chanting, the official said, "These are employees of the prime minister's office and government chanting in celebration." (Watch what Hussein's death could mean in Iraq )

A witness to the execution reported that celebrations broke out after Hussein was dead, and that there was "dancing around the body."

Prime Minister Nuri al-Maliki did not attend the execution, according to an adviser to the prime minister who was interviewed on state television.

"It's a very solemn moment for me," Feisal Istrabadi, Iraq's U.N. ambassador, said on CNN's "Anderson Cooper 360." "I can understand why some of my compatriots may be cheering. I have friends whose particular people I can think of who have lost 10, 15, 20 members of their family, more.

"But for me, it's a moment really of remembrance of the victims of Saddam Hussein."

The execution was videotaped and photographed, state television reported, and those images will be distributed to the media.

Al-Arabiya television network reported that Barzan Hassan, Hussein's half-brother, and Awad Bandar, former chief justice of the Revolutionary Court, were hanged after Hussein. All three were convicted of killings in the Iraqi town of Dujail nearly 25 years ago. (Watch what happened in Dujail )

Earlier, Munir Haddad, a judge on the appeals court that upheld the former dictator's death sentence, and an adviser to al-Maliki each confirmed the paperwork needed for Hussein's execution had been prepared late Friday.

At the same time, a U.S. district judge refused a request to stay the execution.

Attorney Nicholas Gilman said in an application for a restraining order, filed Friday in U.S. District Court in Washington, that a stay would allow Hussein "to be informed of his rights and take whatever action he can and may wish to pursue."

Haddad had called Gilman's filing "rubbish," and said, "It will not delay carrying out the sentence," which he called "final."

Haddad wouldn't disclose the location of the execution and said it wouldn't be broadcast live on TV because of human rights issues.

Throughout the day, there were conflicting reports about who had custody of Hussein. Giovanni di Stefano, one of Hussein's defense attorneys, told CNN the U.S. military officially informed him that the former Iraqi dictator had been transferred to Iraqi custody, but that the move in U.S. court could have meant that Hussein was back in U.S. custody.

There had been speculation that Hussein would be executed before Eid Al-Adha -- a holiday period that means Feast of the Sacrifice, celebrated by Muslims around the world at the climax of the hajj pilgrimage to Mecca. The law does not permit executions to be carried out during religious holidays.

Eid began Saturday for Sunnis and begins Sunday for Shiites. It lasts for four days. Hussein was a Sunni Muslim.