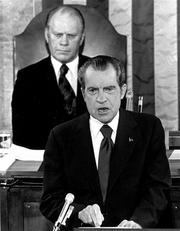 Gerald R. Ford, who picked up the pieces of Richard Nixon's scandal-shattered White House as the 38th and only unelected president in America's history, has died, his wife, Betty, said Tuesday. He was 93.

Ford had battled pneumonia in January 2006 and underwent two heart treatments - including an angioplasty - in August at the Mayo Clinic in Rochester, Minn.

He was the longest living president, followed by Ronald Reagan, who also died at 93. Ford had been living at his desert home in Rancho Mirage, Calif., about 130 miles east of Los Angeles.

Ford was an accidental president, Nixon's hand-picked successor, a man of much political experience who had never run on a national ticket. He was as open and straight-forward as Nixon was tightly-controlled and conspiratorial.

Ford was an accidental president, Nixon's hand-picked successor, a man of much political experience who had never run on a national ticket. He was as open and straight-forward as Nixon was tightly controlled and conspiratorial.

He took office minutes after Nixon flew off into exile and declared "our long national nightmare is over." But he revived the debate a month later by granting Nixon a pardon for all crimes he committed as president. That single act, it was widely believed, cost Ford election to a term of his own in 1976, but it won praise in later years as a courageous act that allowed the nation to move on.

The Vietnam War ended in defeat for the U.S. during his presidency with the fall of Saigon in April 1975. In a speech as the end neared, Ford said: "Today, America can regain the sense of pride that existed before Vietnam. But it cannot be achieved by refighting a war that is finished as far as America is concerned." Evoking Abraham Lincoln, he said it was time to "look forward to an agenda for the future, to unify, to bind up the nation's wounds."

Ford also earned a place in the history books as the first unelected vice president, chosen by Nixon to replace Spiro Agnew who also was forced from office by scandal.

He was in the White House only 895 days, but changed it more than it changed him.

Even after two women tried separately to kill him, the presidency of Jerry Ford remained open and plain.

Not imperial. Not reclusive. And, of greatest satisfaction to a nation numbed by Watergate, not dishonest.