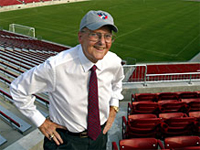 Lamar Hunt, the Kansas City Chiefs' owner who was a founder of the American Football League and one of the leaders of the AFL-NFL merger, has died.

Remembered as a humble and inventive entrepreneur, Hunt also came up with the term "Super Bowl." He died Wednesday night at Presbyterian Hospital of Dallas due to complications from prostate cancer, Chiefs spokesman Bob Moore said. Hunt was 74.

"He wanted people to love the sports like he did," his wife Norma said. "He loved sports so much, he was so passionate about them and he wanted others to share the joy."

Hunt battled cancer for several years and was hospitalized the day before Thanksgiving with a partially collapsed lung. Doctors discovered that the cancer had spread, and Hunt had been under heavy sedation since last week.

"His vision transformed pro football and helped turn a regional sport into a national passion," NFL commissioner Roger Goodell said. "Lamar created a model franchise in the Kansas City Chiefs, but he was always equally devoted to the best interests of the league and the game."

Said former NFL commissioner Paul Tagliabue: "Lamar Hunt was a founding father of modern professional sports and a tremendous sports visionary and leader. He always led with vision, tenacity and humility. He played football at Southern Methodist University and was passionate about the game and a perfectionist as well. Above all else, he was intensely focused on the best interests of the fans -- especially his beloved Chiefs fans -- and on the collective interests of the league and of his fellow owners, no matter the sport."

"He was a founder. He was the energy, really, that put together half of the league, and then he was the key person in merging the two leagues together," Jones said. "You'd be hard-pressed to find anybody that's made a bigger contribution (to the NFL) than Lamar Hunt."

Carl Peterson, the Chiefs' president and general manager, called Hunt "arguably the greatest sportsman of this last half-century, although he never sought fame or recognition for the improvements and changes he brought to the world's sports institutions."

"His was a creative, constructive and loving life not nearly long enough and we will likely never see one like it again," Peterson said.

The son of Texas oilman H.L. Hunt, Lamar Hunt grew up in Dallas and attended a private boys' prep school in Pennsylvania, serving as captain of the football team in his senior year. His love of sports led to his nickname, "Games."

Hunt played football at SMU, but never rose above third string. His modest achievements on the field were dwarfed by his accomplishments as an owner and promoter of teams in professional football, basketball, baseball, tennis, soccer and bowling.

Hunt's business dealings were also the stuff of headlines. Hunt didn't need to make money -- his father was an oil wildcatter who was often referred to as the richest man in the world. But he tried to build on his father's wealth.

Along with two brothers, Hunt tried to corner the silver market in 1979 and 1980. Their oil investments also soured in the 1980s. Some estimated the family's losses in the billions.

Hunt also suffered setbacks in the world of pro sports, but overcame them.

When NFL owners rebuffed Hunt's attempt to buy a franchise and move it to Dallas, Hunt -- ignoring his father's advice -- founded the AFL. He owned one of the AFL's eight original teams from the inaugural 1960 season, the Dallas Texans.

The Texans, however, struggled in head-to-head competition with the expansion Dallas Cowboys of the NFL. Convinced that both franchises would suffer as long as Dallas remained a two-team city, Hunt moved the Texans to Kansas City in 1963.

"I looked around and figured Kansas City could be a success," he told The Associated Press. "By our fourth or fifth year, we started to succeed. The Cowboys of course did very well too."

Hunt realized his dream of becoming an NFL owner after the two leagues reached a merger deal in 1966.

In 1967, the Chiefs lost the first AFL-NFL championship -- it was then called the World Championship Game. Three years later, the Chiefs beat the Minnesota Vikings for the title.

By then, the championship game had been christened the Super Bowl. Hunt came up with the name while watching his children play with a SuperBall.

In 1972, Hunt became the first AFL figure to be inducted into the Pro Football Hall of Fame, and each year the Lamar Hunt Trophy goes to the winner of the NFL's American conference.

Hunt long campaigned to let teams other than Dallas and Detroit play at home on Thanksgiving Day. To honor his effort, the NFL scheduled a third game on the holiday this year -- in Kansas City. Hunt missed it, though, because he was in the hospital and couldn't get the game on TV.

Hunt remained interested in the day-to-day operations of the Chiefs but was never known as a meddlesome owner.

"On Sunday nights after a game, he would always call," Chiefs coach Herm Edwards said. "It would be about 9:30 or 10 o'clock and the phone would ring and I knew it was Lamar. He always said, 'Am I bothering you?'

"Is he bothering me? What a great man, as humble a man as you will ever meet."

For several years, Hunt also owned the minor-league baseball Dallas-Fort Worth Spurs, but his 1964 effort to bring major league baseball to the Dallas-area failed. Eight years later, the Washington franchise moved to suburban Arlington and became the Texas Rangers.

In 1967, Hunt was one of 10 original founding partners in the Chicago Bulls basketball franchise. He was the last remaining original owner.

Also in 1967, Hunt started the first organized effort at a pro tennis tour with World Championship Tennis, and in 1968 he helped bring pro soccer to the United States with his Dallas Tornado of the old North American Soccer League.

In 1969, Hunt tried to buy Alcatraz, the island in San Francisco Bay that once housed a federal prison, and develop it with a tourist park and shopping destination. The idea died amid local protest.

Hunt created Worlds of Fun, a $50 million amusement park, and Oceans of Fun, a $7 million water recreation park, in Kansas City. He opened a pro bowling arena in Dallas -- actress Jayne Mansfield was the opening-night draw.

Hunt was part of H.L. Hunt's "first family" -- the wildcatter had 15 children by three women. Despite huge losses in the silver and oil markets, family members kept much of their wealth protected by elaborate trusts, and their names have long dotted lists of the wealthiest Americans.