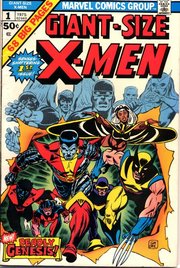 The 63-year-old overhauled the X-Men comic and helped popularize the relatively obscure Marvel Comics in the 1970s. He helped turn the title into a publishing sensation and major film franchise.

Cockrum died in his favorite chair at his home in Belton, South Carolina, after a long battle with diabetes and related complications, his wife Paty Cockrum said Tuesday.

At Cockrum's request, there will be no public services and his body will be cremated, according to Cox Funeral Home. His ashes will be spread on his property. A family friend said he will be cremated in a Green Lantern shirt.

At Marvel Comics, Cockrum and writer Len Wein were handed the X-Men. The comic had been created in 1963 as a group of young outcasts enrolled in an academy for mutants. The premise had failed to capture fans.

Cockrum and Wein added their own heroes to the comic and published "Giant-Size X-Men No. 1" in 1975. Many signature characters Cockrum designed and co-created -- such as Storm, Mystique, Nightcrawler and Colossus -- went on to become part of the "X-Men" films starring Hugh Jackman and Halle Berry.

"Dave saw the movie and he cried -- not because he was bitter," Meth said. "He cried because his characters were on screen and they were living."

Cockrum was born in Pendleton, Oregon, the son of an Air Force officer. He set aside his interest in art while serving in Vietnam for the U.S. Navy.

He moved to New York after leaving the service and got his big break in the early 1970s, drawing the Legion of Super-Heroes for DC Comics before moving to Marvel.

In January 2004, Cockrum moved to South Carolina after being hospitalized for bacterial pneumonia. As his diabetes progressed, his drawings became limited.

His last drawing was a sketch for a fan, who attended a small comic book convention in Greenville, Paty Cockrum said.

Meth said Cockrum will be remembered as "a comic incarnate."

"He had a genuine love for comics and for science fiction and for fantasy, and he lived in it," Meth said. "He loved his work."