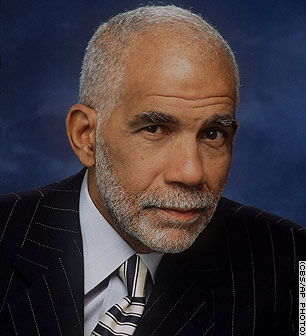 Ed Bradley, the longtime "60 Minutes" correspondent who reported on subjects ranging from jazz musicians to the Columbine school shootings, has died. He was 65.

Bradley died Thursday at New York's Mount Sinai Hospital of leukemia, according to staff members at the CBS program.

Ed Bradley, the longtime "60 Minutes" correspondent who reported on subjects ranging from jazz musicians to the Columbine school shootings, has died. He was 65.

Bradley died Thursday at New York's Mount Sinai Hospital of leukemia, according to staff members at the CBS program.

Bradley joined "60 Minutes" during the 1981-82 season after two years as White House correspondent for CBS News and three years at "CBS Reports." His reporting over the years won him a Peabody Award, 19 Emmys and a Robert F. Kennedy Journalism Award, among many others. He was honored with the Lifetime Achievement award from the National Association of Black Journalists.

His most recent Emmy was for a segment about the reopening of the racial murder case of Emmett Till.

Katie Couric, in announcing the death of Bradley on CBS, described him as "smooth, cool, a great reporter, beloved and respected by all of his colleagues here at CBS News."

CNN correspondent and former CBS reporter John Roberts said the newsman was "always a person you could sit down with and he could keep you intrigued for hours at a time with the stories he could tell."

"He clearly was a field reporter," said Howard Kurtz, media reporter for the Washington Post. "He did not want to be chained to a desk." Kurtz also hosts CNN's "Reliable Sources."

"He was somebody who liked being out there on the story, whether it was in the Vietnam War or whether it was doing investigative work or bringing alive the plight of families who were dealing with illnesses or violence or other issues he covered," Kurtz added.

Bradley was known for his thoughtful, mellifluous voice and often deceptively relaxed interviewing style, a laid-back approach that often prompted unexpected emotion in his subjects. In 2000, he conducted the only television interview with condemned Oklahoma City bomber Timothy McVeigh. His hourlong report on the plight of Africans dying of AIDS, "Death by Denial," won a Peabody.

Roberts, who said he didn't know about Bradley's illness, described his former co-worker's excitement and awe at being able to interview heavyweight champion Muhammad Ali, after Ali put him off for awhile.

Bradley told Roberts he felt Ali was playing a kind of game with him.

According to Roberts, Bradley told him, "He (Ali) said he didn't want to talk. Maybe today, maybe not today. I don't know."

"Bradley told me Ali had this twinkle in his eye that said, 'Yes, I do want to talk to you. I just want to do it on my own time.' And I think for Ed, that was probably one of the most memorable interviews that he's ever done."

Bradley, a great music lover, also interviewed Miles Davis, Lena Horne and Paul Simon, among other performers. He once moonlighted as a disc jockey, earning $1.50 an hour spinning records while working as a teacher by day. In his later years, he hosted the radio show "Jazz at Lincoln Center."

"The idea that I could go to a station and open the cabinet doors of what we called the library and pull out music present and past and play what I liked to play, music I liked to hear, and that there were people out there listening to my taste in music -- man, it just didn't get better than that," he told the online publication All About Jazz in 2004.

Bradley was born June 22, 1941. He grew up in a tough section of Philadelphia, Pennsylvania, where he once recalled that his parents worked 20-hour days at two jobs apiece, according to The Associated Press. "I was told, 'You can be anything you want, kid,' " he once told an interviewer. "When you hear that often enough, you believe it."

Bradley began his career in radio at WDAS in his hometown in 1963. In 1967 he moved to New York and radio station WCBS, and then joined CBS News as a stringer in the Paris bureau in 1971.

CNN's David Fitzpatrick, a former CBS producer who worked with Bradley, said there were tears in the halls of CBS News after word of his passing.

"He was gracious," Fitzpatrick said. "He would always have a smile."

Bradley is survived by his wife, Patricia Blanchet.