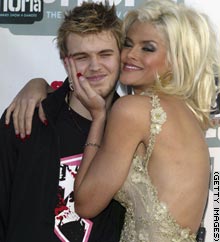 NASSAU, Bahamas (AP) -- The 20-year-old son of Anna Nicole Smith died while visiting his mother in the hospital where the reality TV star and former Playboy playmate had given birth last week, a Bahamas police official said Monday.

Daniel Wayne Smith was visiting his mother in her room at Doctors Hospital in Nassau when he died Sunday, Reginald Ferguson, assistant commissioner of the Royal Bahamian Police Force, told The Associated Press. He said an autopsy was under way.

Smith arrived Saturday night in the Bahamas, and apparently went directly to the hospital where he spent the night in his mother's room, Ferguson said.

"It would appear from our report that the mother had gotten up, saw him in the chair and he appeared to be sound asleep," he said. "She tried to wake him up, he was unresponsive, and she sounded the alarm."

Medical personnel arrived and pronounced him dead at the scene, Ferguson said.

"Anna Nicole is absolutely devastated by the loss of her son. He was her pride and joy and an amazing human being," a statement on the site said. It said that drugs or alcohol were not believed to be a factor.

Her son had traveled to the Caribbean country "to share in the joy of his baby sister," the statement said. "Please do not make any press inquiries at this time so that Anna Nicole can grieve in peace."

Daniel Smith was the product of Smith's 1985 marriage to Billy Smith. The couple, who met while working together at Jim's Krispy Fried Chicken in Mexia, Texas, divorced in 1987.

Daniel Smith had small roles in his mother's movies "Skyscraper" and "To the Limit."

Robin Bonnema, a spokeswoman for Trimspa, the diet products company that has been endorsed by Smith, said she did not know the name of the baby girl's father.

Smith married Texas oil tycoon J. Howard Marshall II in 1994, when she was 26 and he was 89. He died the following year.

She then feuded with Marshall's son, Pierce Marshall, over her entitlement to the tycoon's estate before he died in June at the age of 67.

In the long-running dispute, Smith had won a $474 million judgment, which was later cut to about $89 million and eventually reduced to zero. In May, the U.S. Supreme Court ruled that Smith could continue to pursue the fortune in federal courts in California despite a Texas state court ruling that Marshall's youngest son was the sole heir.