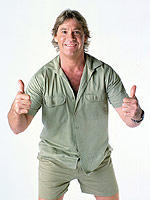 BRISBANE, Australia (AP) -- Steve Irwin, the hugely popular Australian television personality and environmentalist known as the "Crocodile Hunter," was killed Monday by a stingray during a diving expedition, Australian media said. He was 44.

Irwin was filming an underwater documentary on the Great Barrier Reef in northeastern Queensland state when the accident occurred, Sydney's The Daily Telegraph newspaper reported on its Web site.

The Australian Broadcasting Corp. said Irwin was diving near Low Isles Reef near the resort town of Port Douglas, about 1,260 miles north of the state capital of Brisbane.

Queensland ambulance service spokesman Bob Hamil confirmed that a diver had been killed by a stingray off Lowe Isles Reef but refused to say who the victim was until relatives had been notified.

A rescue helicopter was sent from the nearby city of Cairns, and paramedics from it confirmed the diver's death.

"The probable cause of death is stingray strike to the chest," Hamil said.

Staff at Australia Zoo, Irwin's zoo in southern Queensland, said they had heard the reports but could not comment.

Irwin is famous for his enthusiasm for wildlife and his catchcry "Crikey!" in his television program "Crocodile Hunter," which was first broadcast in Australia in 1992 and has aired around the world on the Discovery channel.

He rode his image into a feature film, and developed the Australia Zoo as a tourist attraction.

Irwin had received some negative publicity in recent years. In January 2004, he stunned onlookers at the Australia Zoo reptile park by carrying his 1-year-old son into a crocodile pen during a wildlife show. He tucked the infant under one arm while tossing the 13-foot reptile a piece of meat with the other.

Later that year, he was accused of getting too close to penguins, a seal and humpback whales in Antarctica while making a documentary. Irwin denied any wrongdoing, and an Australian Environment Department investigation recommended no action be taken.

Irwin was also seen as a vocal critic of wildlife hunts in Australia. The federal government recently dropped plans to allow crocodile safaris for wealthy tourists in the Northern Territory following his vehement objections.

Irwin told the Australian television program "A Current Affair" that "killing one of our beautiful animals in the name of trophy hunting will have a very negative impact on tourism, which scares the living daylights out of me."

He is survived by his American wife Terri, from Oregon, and their daughter Bindi Sue, 8, and son Bob, who will turn 3 in December.