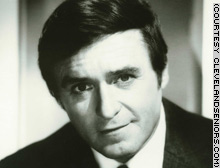 WEST PALM BEACH, Florida (AP) -- Mike Douglas, who drew on his affable personality and singing talent during 21 years as a talk show host, died Friday on his 81st birthday, his wife said.

He died at 5:30 a.m. in a Palm Beach Gardens hospital, said his wife, Genevieve Douglas. She wasn't sure of the cause, but said he had been admitted Thursday.

Douglas became dehydrated on the golf course a few weeks ago and had been treated on and off since. "He was coming along fine, we thought. It was really a shock," she said. "We never anticipated this to happen."

Douglas' afternoon show, which aired from 1961 to 1982, featured his ballad and big-band singing style, other musicians, comedians, sports figures and political personalities, including seven former, sitting or future presidents.

"People still believe 'The Mike Douglas Show' was a talk show, and I never correct them, but I don't think so," Douglas said in his 1999 memoir, "I'll Be Right Back: Memories of TV's Greatest Talk Show."

"It was really a music show, with a whole lot of talk and laughter in between numbers."

Douglas did about 6,000 syndicated shows, most 90 minutes long, and estimated that at its peak the show was seen in about 230 cities.

Tom Kelly, who co-authored Douglas' memoir, said he had about 30,000 guests appear on his show over the years.

"One big key to his great success was he had his ego in check," Kelly said. "He always let the guest have the limelight. He was a fine performer. He could sing, he could do comedy, he did it all, but he always gave the guest the spotlight."

Douglas was among the "early settlers" in daytime talk shows, said Robert Thompson, a professor and director of the Center for the Study of Popular Television at Syracuse University's S.I. Newhouse School of Public Communications.

"Mike Douglas was an old-fashioned traditionalist, holding down the fort while the culture was changing," Thompson said. "He was always the very friendly talk show host, nice to everybody. He would lean toward his guest as if he really cared. He owned that territory."

Douglas fondly recalled when Tiger Woods, who as a preschooler was already drawing attention, appeared on the same 1978 show as Bob Hope, an avid golfer. "I don't know what kind of drugs they've got this kid on," Hope quipped, "but I want some."

Douglas was genial most of the time -- he was nicknamed "the Cary Grant of the coffee break," according to Allmusic.com -- but confided in his memoir that his composure was sorely tested one week in 1972 when former Beatle John Lennon and wife, Yoko Ono, were his unlikely guest hosts. One of the guest celebrities they selected was well-known anti-war activist Jerry Rubin.

"He just got on my nerves. It sounded like this guy hated the president, the Congress, everyone in business, the military, all police and just about everything America stands for," Douglas said.

He recalled becoming confrontational with Rubin. But Lennon "picked up the mantle of Kind and Gentle Host, and he did it quite well, reinterpreting Jerry's comments to take some of the sting out and adding a little humor to keep things cool," Douglas said.

Douglas also had a number of hit singles, first with Kay Kyser's big band -- he was a featured performer on the radio and eventual television program, "Kay Kyser's Kollege of Musical Knowledge" -- and later on his own. "The Men in My Little Girl's Life" hit the top 10 in 1966.

As the rock 'n' roll era began to emerge in the late 1950s, his style became less marketable, so he started looking for a way to energize his career.

He briefly hosted "Hi, Ladies!", a daytime television program on WGN in Chicago. In 1961, Woody Fraser, a Westinghouse Group W program director who had known Douglas in Chicago, recruited him to a Group W station in Cleveland (then KYW) to host a talk and entertainment program.

The show syndicated starting in 1963 but had a limited budget, and Cleveland was not a frequent destination for well-known potential guests. The show moved to Philadelphia in 1965 and to Los Angeles in 1978.

Three years later, Group W replaced Douglas with a younger singer, John Davidson. "The Mike Douglas Show" continued in syndication under Douglas' control until he retired in 1982 to North Palm Beach, Florida. Douglas appeared as a guest on several talk shows but spent much of his leisure time on the golf course.

He was diagnosed with prostate cancer on 1990, but surgery was successful.