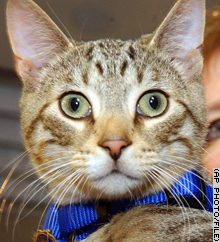 NEW YORK (AP) -- Fred, a tabby who found fame as the "Undercover Kitten," has died in a traffic accident, the Brooklyn district attorney's office said Friday.

Fred was a rescued stray when he was enlisted by law enforcers in February. He posed as a would-be patient to help police nab a man pretending to be a veterinarian.

He got his due at a press conference, where he sported a tiny badge on his collar.

Fred accidentally got out of Moran's house on Thursday, wandered into traffic and was run over by a car.

The district attorney's office said that Fred had been "preparing for a new career in education," with a "significant role" in a classroom program that teaches children how to care for animals.