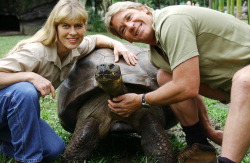 SYDNEY -- A 176-year-old tortoise, believed by some to have been owned by Charles Darwin, has died in an Australian zoo.

The giant tortoise, known as Harriet, was long reputed to have been one of three tortoises taken from the Galapagos Islands by Darwin on his historic 1835 voyage aboard the HMS Beagle.

However, historical records, while suggestive, don't prove the claim, and some scientists have cast doubt on the story, with DNA tests confirming Harriet's age but showing she came from an island that Darwin never visited.

According to local legend, Harriet was just five years old and probably no bigger than a dinner plate when she was taken from the Galapagos to Britain.

She spent a few years in Britain before being moved to the Brisbane Botanic Gardens in Australia's tropical Queensland state in the mid-1800s, where she was mistaken for a male and nicknamed Harry, according to Australia Zoo, which later bought the 150-kilogram (330-pound) tortoise.

The Queensland-based zoo is owned by "Crocodile Hunter" Steve Irwin and his wife Terri.

"She'd been sick yesterday with, in effect, heart failure. She had a very fairly acute heart attack and thankfully passed away quietly overnight," Hangar said.

Irwin said he considered Harriet a member of the family.

"Harriet has been a huge chunk of the Irwin family's life," Irwin said Saturday.

"She is possibly one of the oldest living creatures on the planet and her passing today is not only a great loss for the world but a very sad day for my family. She was a grand old lady."

That title was awarded by the Guinness Book of World Records to Tui Malila, a Madagascar radiated tortoise that was presented to the royal family of Tonga by British explorer Captain James Cook in the 1770s. It died in 1965 at the ripe age of 188.

Scientist Paul Chambers cast doubt on Harriet's Darwin connection in an article in the New Scientist magazine and a book, "The Unexpected History of the Giant Tortoise."