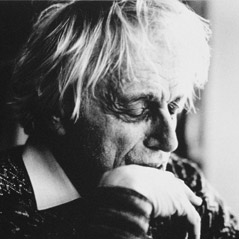 VIENNA -- Composer Gyorgy Ligeti, who survived the Holocaust and fled Hungary after the 1956 revolution, then won acclaim for his opera ''Le Grand Macabre'' and his work on the soundtrack for ''2001: A Space Odyssey,'' died Monday. He was 83.

Ligeti, celebrated as one of the world's leading 20th century musical pioneers, died in Vienna after a long illness, said Christiane Krauscheid, a spokeswoman for his publisher, Germany-based Schott Music. Details were unavailable, but Austrian media said he spent the last three years in a wheelchair.

Ligeti (pronounced lig'-ih-tee) was born in 1923 to Hungarian parents in the predominantly ethnic Hungarian part of Romania's Transylvania region. His father and brother later were murdered by the Nazis. He took Austrian citizenship in 1967 after fleeing his ex-communist homeland.

He began studying music under Ferenc Farkas at the conservatory in Cluj, Romania, in 1941, and continued his studies in Budapest. But in 1943, he was arrested as a Jew and sentenced to forced labor for the rest of World War II.

''My life in the Nazi era and under communist rule was full of risks, and I believe I still reflect this feeling,'' he once told the Austria Press Agency in an interview.

After the war, Ligeti resumed his studies with Farkas and Sandor Veress at Budapest's Franz Liszt Academy. After graduation in 1949, he did research on Romanian folk music and then returned to the academy as an instructor in harmony, counterpoint and formal analysis.

Ligeti attracted wide atttention for ''Macabre,'' which he wrote in 1978.

Ligeti's early work was heavily censored by Hungary's repressive regime, but his arrival in Vienna in 1956 opened up new possibilities. In the Austrian capital, he met key players in Western Europe's avant-garde music movement such as Karlheinz Stockhausen, Gottfried Michael Koenig and Herbert Eimert, who invited him to join an electronic music studio at West Germany's state radio in Cologne in 1957.

He won early critical acclaim for his 1958 electronic composition ''Artikulation'' and the orchestral ''Apparitions.'' He gained notoriety for a technique he called ''micropolyphony,'' which wove together musical color and texture in ways that transcended the traditional borders of melody, harmony and rhythm.

Ligeti spoke at least six languages, including his native Hungarian, German, French, and English, said Stephen Ferguson, who worked as his assistant and editor at Schott Music from 1992-96.

''He was one of the few avant-garde composers who found his way into the modern program,'' Ferguson said. ''He was fascinated by patterns, but at the same time created wonderful atmospheres, such as in the music used in '2001: A Space Odyssey,' or in 'Clocks and Clouds.'

''He reintroduced techniques of polyphony out of the tradition of Bach and Palestrina with a playful and innovative sense of sound. He developed a new sound -- cluster sound -- which fascinated director Stanley Kubrick and propelled Ligeti to the top of the great composers of the second half of the 20th century.''

Excerpts of his ''Atmospheres,'' a requiem and 1966's ''Lux Aeterna'' were used on the bestselling soundtrack for Kubrick's ''Space Odyssey.'' Although the music was not the film's well-known fanfare, which was composed by Richard Strauss, it won Ligeti a global audience.

Kubrick returned to Ligeti in 1999, using the composer's Musica Ricercata II (Mesto, rigido e cerimoniale), as the theme for what turned out to be his final film, ''Eyes Wide Shut.''

Ligeti, who for a time also lived in Germany and San Francisco and was a visiting professor at the Stockholm Academy of Music for many years, was known for striking a playful note with his music, epitomized by a piece he wrote for 100 metronomes.

Sir Simon Rattle was a fan of Ligeti and led many performances of his works during his tenure at the City of Birmingham Symphony Orchestra before taking over the Berlin Philharmonic.

Austrian Chancellor Wolfgang Schuessel hailed Ligeti on Monday as ''the greatest Austrian in the 20th century music world,'' and the city of Vienna said it would offer a special grave site in honor of its adopted composer.

Ligeti is survived by his wife, Vera, and a son, Lukas, a percussionist who lives in New York. Funeral arrangements were incomplete.