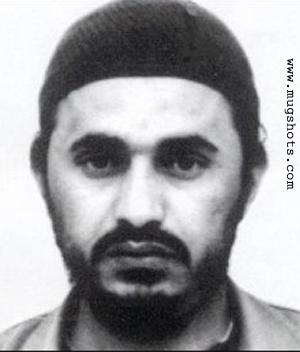 BAGHDAD -- Abu Musab al-Zarqawi, the most-wanted terrorist in Iraq who waged a bloody campaign of beheadings and suicide bombings, was killed when U.S. warplanes dropped 500-pound bombs on his isolated safehouse, officials said Thursday. His death was a long-sought victory in the war in Iraq.

Al-Zarqawi and several aides, including spiritual adviser Sheik Abdul Rahman, were killed Wednesday evening in a remote area 30 miles from Baghdad in the volatile province of Diyala, just east of the provincial capital of Baqouba, officials said.

At the White House, President Bush hailed the killing as "a severe blow to al-Qaida and it is a significant victory in the war on terror."

But he cautioned: "We have tough days ahead of us in Iraq that will require the continuing patience of the American people."

The news came amid more reports of violence in Iraq, with two bombs striking a market and a police patrol in Baghdad, killing at least 19 people and wounding more than 40.

Al-Qaida in Iraq confirmed al-Zarqawi's death and vowed to continue its "holy war," according to a statement posted on a Web site.

"We want to give you the joyous news of the martyrdom of the mujahed sheik Abu Musab al-Zarqawi.

"The death of our leaders is life for us. It will only increase our persistence in continuing holy war so that the word of God will be supreme."

Gen. George Casey, the top U.S. commander in Iraq, said the hunt for al-Zarqawi began two weeks ago, and his body was identified by fingerprints and facial recognition. The U.S. military showed a picture of al-Zarqawi's face after the airstrike, with his eyes closed and spots of blood behind him.

"We had absolutely no doubt whatsoever that Zarqawi was in the house," Caldwell said.

Casey said tips and intelligence from senior leaders of al-Zarqawi's network led U.S. forces to al-Zarqawi as he was meeting with associates. Iraqi police were first on the scene after the airstrike, he said.

The announcement about al-Zarqawi's death came six days after he issued an audiotape on the Internet, railing against Shiites in Iraq and saying militias were raping women and killing Sunnis. He urged the community to fight back.

The Jordanian-born terrorist was Iraq's most-wanted militant and was nearly as notorious as Osama bin Laden, to whom he swore allegiance in 2004. The United States put a $25 million bounty on his head, the same as bin Laden. Al-Maliki told al-Arabiya television the bounty would be honored, saying "we will meet our promise," without elaborating.

Al-Zarqawi is believed to have beheaded two Americans - Nicholas Berg of West Chester, Pa., and Eugene Armstrong, formerly of Hillsdale, Mich. - prompting supporters to dub him "the slaughtering sheik."

Al-Maliki said the Wednesday night airstrike by U.S. forces was based on intelligence reports provided to Iraqi security forces by area residents.

A Jordanian official said the kingdom also provided the U.S. military with information that helped track down al-Zarqawi, who claimed responsibility for a November triple suicide bombing against Amman hotels that killed 60.

The official, who spoke on condition of anonymity because he was addressing intelligence issues, would not elaborate, but Jordan is known to have agents operating in Iraq to hunt down Islamic militants.

Some of the information came from Jordan's sources inside Iraq and led the U.S. military to the area of Baqouba, the official said.

Iraqi Foreign Minister Hoshyar Zebari told The Associated Press that a serious effort to find al-Zarqawi had been underway since he appeared in a videotape in late April - the same week messages were broadcast by bin Laden and his top deputy, Ayman al-Zawahri.

He said the location in which al-Zarqawi appeared in the videotape had been "pinpointed," without elaborating.

Baqouba has in recent weeks seen a spike in sectarian violence, including the discovery of 17 severed heads in fruit boxes. It also was near the site of a sectarian atrocity last week in which masked gunmen killed 21 Shiites, including a dozen students pulled from minibuses, after separating out four Sunni Arabs.

"Those who disrupt the course of life, like al-Zarqawi, will have a tragic end," al-Maliki said. He also warned those who would follow the militant's lead that "whenever there is a new al-Zarqawi, we will kill him."

"This is a message for all those who embrace violence, killing and destruction to stop and to (retreat) before it's too late," he said. "It is an open battle with all those who incite sectarianism."

A U.S. defense intelligence official, who requested anonymity while events were unfolding, said there is no intelligence indicating that extremists planned attacks that would be triggered by al-Zarqawi's death.

However, the official said, with his death, there may be some retaliation.

It was not clear to American authorities who would succeed al-Zarqawi as the leader of al-Qaida in Iraq. The official noted that a number of al-Zarqawi's deputies have been taken out in recent months, which could cause chaos among the group's top tier.

Caldwell said an Egyptian-born man he identified as Abu al-Masri will probably take over al-Qaida in Iraq.

In Jordan, al-Zarqawi's older brother said the insurgent leader was a martyr, and the family had long expected his death. Al-Zarqawi's family had renounced him in the wake of the Amman bombings.

"We anticipated that he would be killed for a very long time," Sayel al-Khalayleh told The Associated Press by phone from Zarqa, the town from which al-Zarqawi derived his name.

Al-Zarqawi's oversaw a wave of kidnappings of foreigners and the killings of at least a dozen, including Arab diplomats and three Americans. He also was a master Internet propagandist, spreading the call for Islamic extremists to join the "jihad," or holy war, in Iraq. His group posted gruesome images of beheadings, speeches by al-Zarqawi and recruitment videos depicting the planning and execution of its most daring attacks.

Iraqi citizens had mixed reactions to the news of al-Zarqawi's death.

Thamir Abdulhussein, a college student in Baghdad, said he hoped the killing would promote peace between the fractured ethnic and sectarian groups.

"If it's true al-Zarqawi was killed, that will be a big happiness for all the Iraqis," he said. "He was behind all the killings of Sunni and Shiites. Iraqis should now move toward reconciliation. They should stop the violence."

Amir Muhammed Ali, a 45-year-old stock broker in Baghdad, was skeptical that al-Zarqawi's death would end the unrelenting sectarian violence and said the Iraqi resistance to U.S.-led forces likely would continue.

"He didn't represent the resistance, someone will replace him and the operations will go on," he said.

In the past year, al-Zarqawi moved his campaign beyond Iraq's borders to Jordan and Lebanon, where he claimed responsbility for a rocket attack from Lebanon into northern Israel.

U.S. forces and their allies came close to capturing al-Zarqawi several times since his campaign began in mid-2003.

The closest brush may have come in late 2004. Deputy Interior Ministry Maj. Gen. Hussein Kamal said Iraqi security forces caught al-Zarqawi near the insurgent stronghold of Fallujah but then released him because they did not realize who he was.

In May 2005, Web statements by his group said al-Zarqawi had been wounded in fighting with Americans and was being treated in a hospital abroad - raising speculation over a successor among his lieutenants. But days later, a statement said al-Zarqawi was fine and had returned to Iraq. There was never any independent confirmation that he was wounded.

U.S. forces believe they just missed capturing al-Zarqawi in a Feb. 20, 2005, raid in which troops closed in on his vehicle west of Baghdad near the Euphrates River. His driver and another associate were captured and al-Zarqawi's computer was seized along with pistols and ammunition.

U.S. troops twice launched massive invasions of Fallujah, the stronghold used by al-Qaida in Iraq fighters and other insurgents west of Baghdad. An April 2004 offensive left the city still in insurgent hands, but an October 2004 assault wrested it from them.