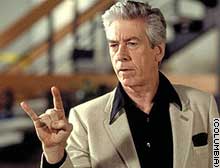 BURBANK, California (AP) -- Paul Gleason, who played the go-to bad guy in "Trading Places" and the angry high school principal in "The Breakfast Club," has died. He was 67.

BURBANK, California (AP) -- Paul Gleason, who played the go-to bad guy in "Trading Places" and the angry high school principal in "The Breakfast Club," has died. He was 67.

Gleason died at a local hospital Saturday of mesothelioma, a rare form of lung cancer linked to asbestos, said his wife, Susan Gleason.

"Whenever you were with Paul, there was never a dull moment," his wife said. "He was awesome."

A native of Miami, Gleason was an avid athlete. Before becoming an actor, he played Triple-A minor league baseball for a handful of clubs in the late 1950s.

Gleason honed his acting skills with his mentor Lee Strasberg, whom he studied with at the Actors Studio beginning in the mid-1960s, family members said.

In "Trading Places," Gleason portrayed an industry spy who stole orange futures -- and wound up locked in a cage with an extremely affectionate male gorilla.

Through his career, Gleason appeared in more than 60 movies that included "Die Hard," "Johnny Be Good," "National Lampoon's Van Wilder," and "Not Another Teen Movie." Most recently, Gleason made a handful of television appearances in hit shows such as "Friends" and "Seinfeld."

Gleason's passions went beyond acting. He had recently published a book of poetry.

"He was an athlete, an actor and a poet," said his daughter, Shannon Gleason-Grossman. "He gave me and my sister a love that is beyond description that will be with us and keep us strong for the rest of our lives."

Actor Jimmy Hawkins, a friend of Gleason's since the 1960s, said he remembered Gleason for a sharp sense of humor.

"He just always had great stories to tell," Hawkins said.

Gleason was survived by his wife, two daughters and a granddaughter. Funeral plans were pending.