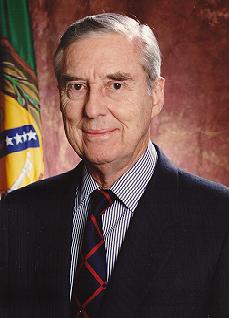 HOUSTON, Texas (AP) -- Lloyd Bentsen, a courtly Texan who represented the state in Congress for 28 years and served as President Clinton's first treasury secretary, died Tuesday morning, his family said. He was 85.

Bentsen, also the Democratic 1988 vice presidential nominee, died at his home in Houston.

It was during that campaign that he told rival Dan Quayle in a debate, "You're no Jack Kennedy."

His distinguished political career took him from the humble beginnings of a county office in the Rio Grande Valley in the 1940s to six years in the U.S. House, 22 in the U.S. Senate and two in the Clinton Cabinet, where he was instrumental in directing the administration's economic policy.