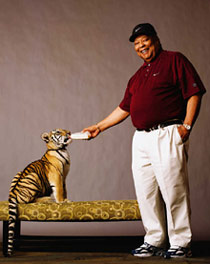 Earl Woods, who was more determined to raise a good son than a great golfer and became the architect and driving force behind Tiger Woods' phenomenal career, died Wednesday morning at his home in Cypress, Calif. He was 74.

"My dad was my best friend and greatest role model, and I will miss him deeply," Tiger Woods said on his Web site. "I'm overwhelmed when I think of all of the great things he accomplished in his life. He was an amazing dad, coach, mentor, soldier, husband and friend. I wouldn't be where I am today without him, and I'm honored to continue his legacy of sharing and caring."

A habitual smoker who had heart bypass surgery in 1986, Woods was diagnosed with prostate cancer in 1998 and was treated with radiation, but the cancer returned in 2004 and spread throughout his body.

Last month, he was too frail to travel to the Masters for the first time.

The last tournament Woods attended was the Target World Challenge in December 2004, when his son rallied to win and then donated $1.25 million to the Tiger Woods Foundation that his father helped him establish. The Tiger Woods Learning Center, another vision inspired by his father, opened in February.

Woods decided not to play in the Wachovia Championship this week in Charlotte, N.C. Two of his best friends on tour, Mark O'Meara and John Cook, withdrew from the tournament and flew to California to be with him.

Jack Nicklaus, who also was 30 when his father died, said he had long "admired and related to the close bond" shared by Tiger and Earl.

"My father was my best friend, my mentor and perhaps my greatest support system. Earl was all of that to Tiger," he said.

Earl Woods was more than a golf dad, more than a zealous father who lived vicariously through his son's achievements.

He had played catcher for Kansas State, the first black to play baseball in the Big Eight Conference, and he had been a Green Beret for two tours in Vietnam. But he felt his true purpose was to train Tiger, and he watched his son evolve into the dominant player of his time -- the youngest player to win the career Grand Slam -- and one of the most celebrated athletes in the world.

"I knew Tiger was special the day he was born," Woods said in a May 2000 interview with The Associated Press.

Woods introduced Tiger to golf by swinging a club as his son watched in a high chair. Tiger appeared on the "Mike Douglas Show" at age 2, played exhibitions with Sam Snead and Jack Nicklaus, and his television appeal was solely responsible for quantum gains in PGA Tour prize money.

Even so, Woods said he never intended to create a champion golfer.

"I make it very, very clear that my purpose in raising Tiger was not to raise a golfer. I wanted to raise a good person," Woods told Golf Digest magazine about his book, "Training a Tiger: A Father's Guide to Raising a Winner in Both Golf and Life."

Woods gave his son freedom to develop a love for golf on his own, not letting him play unless his homework was done, making him call his father at work to ask if they could practice. Along with the games they played, Woods taught him to be mentally strong by jingling change in his pockets and warning him of water hazards when his son was in the middle of his swing.

Tiger Woods set records that might never be broken by winning three straight U.S. Junior titles, followed by three straight U.S. Amateurs. In 10 years as a pro, he already has won 48 times on the PGA Tour with 10 major championships, and he set a PGA Tour record by going seven years and 142 consecutive events making the cut.

In the forward to his father's book, Woods said: "In retrospect, golf for me was an apparent attempt to emulate the person I looked up to more than anyone: my father. He was instrumental in helping me develop the drive to achieve, but his role -- as well as my mother's -- was one of support and guidance, not interference."

PGA Tour commissioner Tim Finchem said Woods will be remembered for providing Tiger every opportunity "to become the world's best golfer and an outstanding representative of the game and its values."

Foremost for Earl Woods was raising a son who could influence life beyond golf. Woods was black and his wife, Kultida, whom he met during one of his tours to Vietnam, was Thai and Chinese.

Tiger Woods won twice in his first seven PGA Tour events after turning pro in 1996 at age 20 and was named Sports Illustrated Sportsman of the Year. Woods predicted greatness for Tiger on and off the course, telling the magazine that his son "will do more than any other man in history to change the course of humanity."

"He's the bridge between the East and the West," the father said. "There is no limit because he has the guidance. I don't know yet exactly what form this will take. But he is the Chosen One. He'll have the power to impact nations. Not people. Nations. The world is just getting a taste of his power."

Perhaps the lasting image of Earl Woods came the next spring, at the 1997 Masters, when he stepped onto the 18th green and wrapped his arms around a 21-year-old son who shattered records at Augusta National, a watershed victory that changed the appeal of golf and sent him to the greatness his father had always predicted.

Earl Woods was born March 5, 1932, in Manhattan, Kan., the youngest of six children. His parents died by the time he was 13.

His father wanted him to play for the Kansas City Monarchs in the Negro Leagues, and his mother stressed education. Woods wound up going to Kansas State, graduating in 1953 with a degree in sociology.

Woods did two tours during the Vietnam War as a member of the U.S. Army Special Forces, rising to the rank of lieutenant colonel. It was his second tour that shaped the latter part of his life.

He met Kultida Punsawad, who was working as a receptionist in Thailand, and married her in 1969. He fought alongside Lt. Col. Nguyen T. Phong of the South Vietnamese army, a friend he nicknamed "Tiger" because of his courage and bravery. Woods promised Tiger Phong that he would name a son after him.

Earl Woods moved to Cypress, Calif., -- to the house where he died -- and set up a makeshift practice range in the garage with a mat and a net, placing his son in a high chair as he practiced.

The education went beyond swinging a club.

"I tried to break him down mentally, tried to intimidate him verbally, by saying, 'Water on the right, OB on the left,' just before his downswing," Woods once said in an AP interview. "He would look at me with the most evil look, but he wasn't permitted to say anything. That's the frustration. He couldn't say a word, but he always had an escape word. He never used it.

"One day I did all my tricks, and he looked at me and smiled," Woods said. "At the end of the round, I told him, 'Tiger, you've completed the training.' And I made him a promise. 'You'll never run into another person as mentally tough as you.' He hasn't. And he won't."

Woods was proud of saying he never left his son with a babysitter, but his goal was to eventually let Tiger run his own life.

"I had pulled back, one item at a time," Woods once told the AP. "Instead of going to several tournaments, it was a couple of tournaments, then one tournament. All of a sudden, he was running everything. I stood there and watched it happen. Because that was my job -- to prepare him to leave."

Besides his wife and Tiger, Woods is survived by three children from his previous marriage.

A private service will be held Friday.