Caspar W. Weinberger, Who Served 3 Republican Presidents, Is Dead at 88 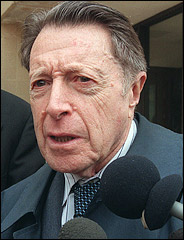 Caspar W. Weinberger, who held high positions under three Republican presidents and oversaw the biggest and costliest military buildup in peacetime history as Ronald Reagan's secretary of defense, died yesterday in Bangor, Me., after a brief illness. He was 88.

Mr. Weinberger lived nearby in Mount Desert, Me. His son, Caspar Jr., also of Mount Desert, said his father had been undergoing kidney dialysis for two years and died of pneumonia. His wife of 63 years, Jane, was by his side when he died, his son said.

Until his death, Mr. Weinberger was chairman of Forbes Inc. He had continued to travel around the world until recently, his son said, and wrote a regular column for Forbes magazine. A book by Mr. Weinberger, "Home of the Brave: A Tribute to Unsung Heroes in the War on Terror," which he wrote with Wynton C. Hall, will be published in June by Forge Press.

A self-assured man and a tenacious debater, Mr. Weinberger served in Washington off and on for almost two decades. He was a crucial backer of Mr. Reagan's missile-based Strategic Defense Initiative, popularly known as Star Wars. He was also an implacable foe of the Soviet Union, a posture that put him increasingly at odds with Secretary of State George P. Shultz, who leaned more toward arms-control negotiations with Moscow.

By the time Mr. Weinberger left the Pentagon in 1987, Mr. Reagan had been swayed by Mr. Shultz (who had the president's wife, Nancy, in his corner). The president who had once derided the Soviet Union as "an evil empire" got along well with the Russian leader, Mikhail S. Gorbachev, who seemed cut from different cloth than his drab but ruthless predecessors.

Mr. Weinberger never lost his bone-deep suspicion of the Russians, and his comments after the collapse of the Soviet Union suggested that he still had more faith in arms than diplomacy, at least in dealing with the Kremlin.

Many felt that Mr. Weinberger's record was marred late in life by questions about his role in the Iran-contra affair — questions a presidential pardon left unresolved — but his résumé was impressive by any standard.

Under President Richard M. Nixon, he was chairman of the Federal Trade Commission; deputy director and later director of the Office of Management and Budget, where he earned the nickname Cap the Knife by smilingly arguing against requests for more money; and secretary of health, education and welfare.

He remained as secretary of the health and welfare agency under President Gerald R. Ford until 1975, when he left Washington for his native California. He said his wife could better cope with her arthritis there.

It was after he returned to the capital as defense secretary for Mr. Reagan in 1981 that Mr. Weinberger made his real mark. His mission, he said early on, was "to rearm America." His view was that previous efforts to get along with the Russians without demanding good behavior in return had reinforced "the Soviet prison wall," which stretched, he said, "from the Balkans to the Baltic."

The rise of the charismatic Mr. Gorbachev in the mid-1980's did not soften those views. "I don't think just because he wears Gucci shoes and smiles occasionally that the Soviet Union has changed its basic doctrines," Mr. Weinberger said in 1987, as he was leaving office.

So while other parts of the federal government were cringing under the cut-to-the-bone philosophy of the Reagan White House (as the old Cap the Knife might have desired), Mr. Weinberger demanded billions more for nuclear arms, ships, planes and tanks. "This is not a one-year program for summer soldiers," he warned in 1981.

He was true to his word. Year after year, he fought for big increases in Pentagon spending and usually won.

Mr. Weinberger also tried to alleviate the historic rivalries among the services. He ordered the branches to find more roles for women. He delegated more planning authority to the chiefs of staff and the service secretaries so that he could devote more time to policy.

A blemish in his 35 years of public service came in 1992, five years after he left the cabinet. That year, he was indicted on felony charges of perjury and obstruction of justice in connection with the covert sale of arms to Iran and the diversion of some of the proceeds to the Nicaraguan rebels, or contras.

The tangled transactions, which came to be known as the Iran-contra affair, were against the declared policy of the United States. Subsequent investigations depicted Mr. Reagan as determined to win the release of American hostages held in the Middle East and eager to obtain the help of Iranian "moderates" to do so.